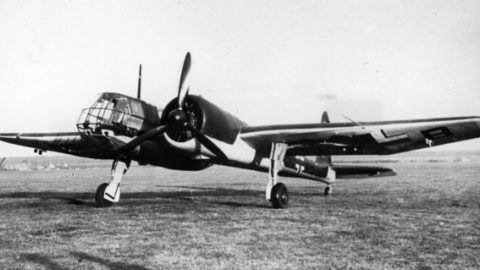 The Blohm and Voss Bv 141 tactical reconnaissance plane/army cooperation aircraft is definitely on the shortlist of the most unusual aircraft designs in the history of military aviation.

The Blohm & Voss company was best known for its flying boats used in maritime reconnaissance such as the BV 238 – the heaviest, largest Axis aircraft produced during the war.

The “flying boat ethos” was Walter Blohm’s brainchild who, after having been mired in financial crisis during the interwar years, focused on developing passenger aircraft for commercial profit. But the hiring of seasoned military aircraft designer Dr. Richard Vogt changed the prevailing philosophy within the aircraft firm: It signaled a breakaway from the traditional aircraft design of straight-edged monoplanes.

Dr. Vogt’s unique approach to his work came alive in the form of the Blohm & Voss Bv 141, which was widely considered as one of the most unorthodox plane designs in the history of military aviation.

The Germans made a plane that still offends my OCD to this day. BV-141. pic.twitter.com/9SfCjBGeki

The Reich Air Ministry called for a fresh single-engine design and was more than intrigued with Blohm & Voss’ proposal.

The established shipbuilding company set up an aircraft manufacturing company in 1933 called the Hamburger Flugzeugbau. By the end of the war, the company had a total of 215 aircraft projects under its belt.

The Bv 141 was a result of Dr. Vogt’s notoriety for the unconventional. The plane’s asymmetrical design was purposely built to provide maximum visibility which was an essential feature of a specialized reconnaissance plane.

The plane’s nacelle – which was placed in one of the plane’s slender booms – reportedly offered an excellent view in all directions, which could have made it an excellent reconnaissance plane.

The Air Ministry eventually shied away from the Bv 141 and opted for the Focke Wulf Fw 189 Uhu.

When the Air Ministry’s Ernst Udet tested the aircraft, he shortlisted the Bv 141 in his list of tactical recon planes that offered the most potential. The design was not a hindrance as most people believed – the spanwise center of gravity was kept close near the center of the wing and did not drastically affect its roll moments.

Despite Udet’s glowing recommendation, the Air Ministry pulled the plug and discontinued the plane’s further production. The powers-that-be in the Ministry and in the Technical Air Armament Board just couldn’t get on board with Dr. Vogt’s eccentricities and a knack for new and confounding ideas.

Moreover, the Bv 141 had a maximum range of 746 miles, which was almost twice as much as the preferred (and ultimately chosen) twin-engined Focke Wulf Fw 189 Uhu (Owl) which clocked just 416 miles.

The latter had a very successful operational history as a short-range tactical reconnaissance in the Eastern Front and effectively made the Bv 141 dispensable from Germany’s war efforts.