This New Zumwalt-class Destroyer Has A Radar Signature Of… 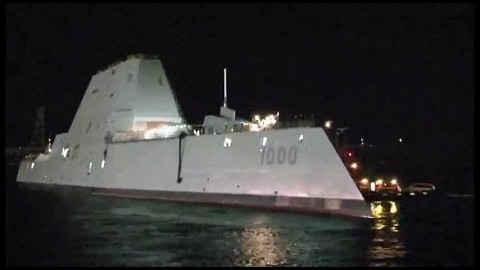 This Is One High Tech Destroyer

The Zumwalt-class destroyers are the newest addition to the United States Navy. In need of a newer, more advanced ship, this new design is meant to be used for multi-mission operations with a focus on ground attack. They are meant to aid in surface warfare, anti-aircraft warfare as well as naval gunfire support. As you can probably tell by its chiseled design, it is meant to be a stealth destroyer.

40% bigger than preceding destroyers, this stealth ship has the radar signature of a fishing boat.

Impressive to look at, the entire ship is filled with state of the art equipment. From its tumblehome wave piercing hull to its permanent-magnet motor propulsion system, its capabilities are unmatched by anything in existence. With that however, comes a price and a big one at that. With a proposed budget of 9.6 billion U.S.D. from its inception in 2005, the cost rose faster than results were produced. Originally, 32 destroyers were ordered but that number dwindled down to three. In this video, you’ll see the first one leaving the dock, while two more or on the way. The completed destroyer is designated DDG-1000 and will be commissioned in 2016.