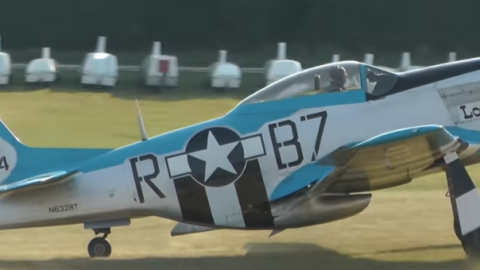 There is so much to say about the infamous P-51 Mustang better known as “The Louisiana Kid.” This particular plane was built in the 1940s serving the Royal Canadian Air Force, suffered a crash in 1963 and was rebuilt and later sold to a private collector named Don Weber in Louisiana where this plane earned its namesake. The Louisiana Kid would spend many more years in museums before an odd twist of fate would take it around the world again.

“It was purchased in 2012 by Wilhelm Heinz in Germany, was dismantled in the US and then shipped across the ocean in a container arriving in Germany in February [that] year. It was moved to Heinz’s base at Degerfeld and there re-furbished and re-assembled.”

Quite the history to this beautiful P-51 Mustang. Nowadays The Louisiana Kid has been flying through the German hillside performing for crowds of adoring fans. In this video the see this plane at its finest. A big crowd, high speeds, a roaring engine, amazing moves and the amazing P-51 Mustang, the Louisiana Kid.