The Statistics That Kept Countless Allied Fighter Planes In The Sky 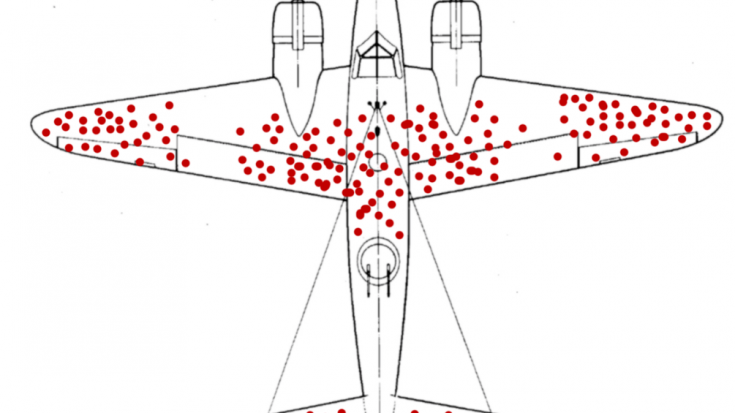 Turns out, the secret to improving the odds of returning aircraft was not additional armor on the most damaged parts.

During the war, The United States commissioned a select group of mathematicians which came to be known as the Statistical Research Group.  They worked around the clock in developing ballistic tables, patterns, and computational devices that helped the military find solutions to problems that are beyond the comprehension of the eyes.

One of these elite mathematicians is Albert Wald, who is considered to have advanced the field of probability and statistics with a keen eye for neglected data. He is famous for preventing the military from falling into a common error in perception: The Survivorship Bias.

What is Survivorship Bias?

Survivorship Bias is a selection bias that focuses on the survivors in evaluating an event or outcome.

When it came to fighter planes returning from combat, they were evaluated based on the location of bullet holes they received.

Survivorship bias During World War Second,soldiers faced a tough problem.Their planes were getting shot down by enemies at a high rate.So,they conducted a study to add extra security in parts of the plane to prevent them from getting shot down.They conducted a study on planes that returned safely to air bases even after getting shot by enemies.During the study which was conducted on aeroplanes that survived shots, statisticians suggested to add extra layers of security in the planes at parts which have received maximum shots,which are depicted by red dots in above picture, as survived ships were getting shot by enemies there. But,Abraham Wald ,a statistician of pure intelligence thought differently than others and refuted the theory proposed by majority of statisticians.He instead proposed to add more security at places where red dots are not present. Can you guess why? That's because statisticians were just considering survived ships.And the parts where aeroplanes are getting shot had returned safely even after getting shot. Abraham said-"What about ships that have not survived?" The parts not depicted by red dots in the picture are parts where aeroplanes got shot and destroyed on the spot.After getting hit at those parts,they never made it back to the airbases.Hence, their data was not available for inspection and this scenario was ignored by statisticians. This was the birth of legendary survivorship bias which is still used in many business cases till date. How many times we just look at data that is available in front of us and ignore data that is not visible? How many times we just pay heed to majority and ignore minority's views? Minority may be outnumbered but they have an important point to make that can be pretty powerful and can solve major issues. Next time pay heed to what small number of people are trying to say.May be their viewpoint can solve issues in an instant. Look at the above picture. #statistics #interestingtheory #theory #concept #idea #data #survivorshipbias #bias #interesting

Why was it a foolish idea to put more armor on the most susceptible parts of the plane?

But the real reason against additional armor is that the holes precisely showed the strongest parts of the plane since the plane survived despite the damage it suffered.

To put it simply, the plane survived despite being hit on those specific parts, and that means that those badly-hit parts can withstand enemy fire.

And boiled down to its essence: The holes revealed the parts that needed the least additional protection.

How did Wald keep the military officers from falling prey to the Survivorship Bias?

“Where are the missing holes?”

The missing bullets, he said, were on the missing planes.  Some planes successfully returned because they had less damage to their engines, and those that got badly damaged engines were gone.

Thus, the additional armor was placed on the engines.

On the other hand, he convincingly argued that the returning planes with the badly damaged fuselage evidenced that fuselage hits should be tolerated as much as possible.