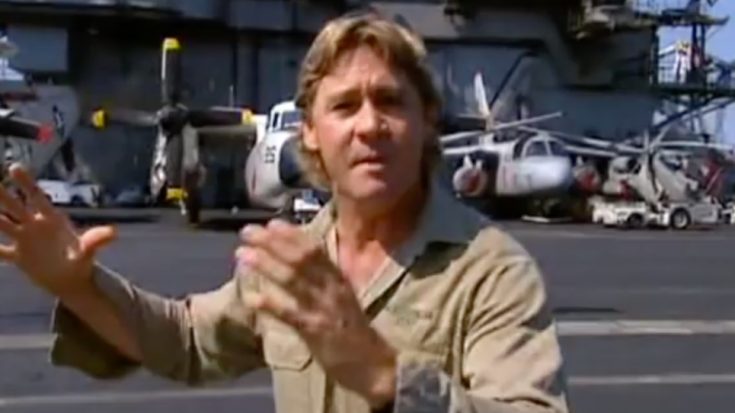 It turns out the Crocodile Hunter approached more than exotic animals out in the wild – he also went chasing after WWII relics.  “Ghosts of War,” the resulting 100 minute long documentary series, aired in 2002. Crikey!

With his typical enthusiasm, Irwin boards aircraft carriers, hikes through a jungle, and gets a shock when he spots human remains in the Operation Hailstone wrecks at Chuuk Lagoon.

In the clip below, Irwin comes upon the crash site of a Catalina in Guadalcanal. As he approaches it, he whispers, “15 feet from it and it’s hard to distinguish,” just like he might do while nearing a crocodile.

It’s great to see Irwin so immersed in history. He explains the uses of the Catalina in the Pacific for spotting submarines, acting as air transport, and performing reconnaissance. This particular Catalina, he says, missed the radar beacon and plowed into the side of the mountain, killing all 9 crew members.

Though his style of presentation might be a little much for some viewers, don’t doubt that Irwin had the utmost respect for these relics and the men who fought so fiercely.

Unfortunately, it doesn’t seem like this series was all that popular. However, it’s a real treat. You can find longer segments on YouTube. We definitely recommend it for both a different perspective on the legendary Crocodile Hunter and some exciting WWII site viewing!