The WWII Cartoon Warner Bros. Doesn’t Want You To See 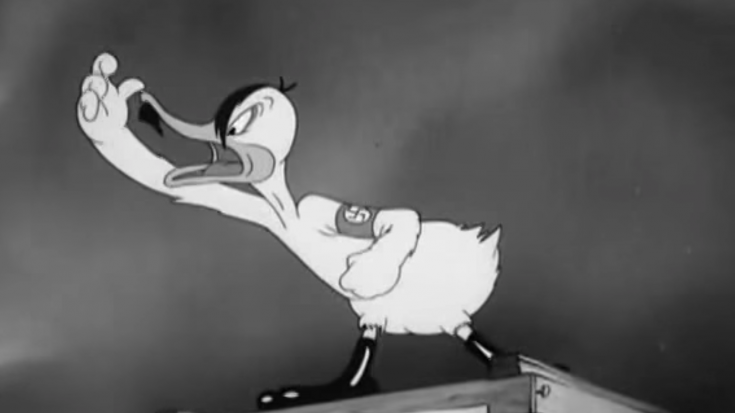 During the early 1940s, war propaganda films were very common in American cinema, in fact, they were so common that most of the animation studios began creating their own cartoons spoofing the war. In August of 1942 Warner Bros. released a Looney Toons short titled “The Ducktators” satirizing Hitler and the Axis Powers.

This cartoon features a barnyard full of ducks, geese and chickens living peacefully until a jet black egg hatches revealing a goose resembling Adolf Hitler. True to form the Hitler goose begins goose-stepping around the barnyard rallying ignorant ducks to his cause in a parody of Hitler’s rise to power.

This cartoon is considered to be the finest work from animation director Norman McCabe and was praised for its storytelling and humor. The version seen here includes an advertisement for war bonds and stamps, this clip was removed from home video releases.

The Ducktators along with many other war cartoons were banned after WWII because the United States no longer needed war propaganda and to distance the characters from content that may be considered offensive.

Despite being banned The Ducktators remains a timeless piece and stays relevant to WWII history, the cartoon was so influential that it was even rumored to be an inspiration for Animal Farm by George Orwell released in 1945.