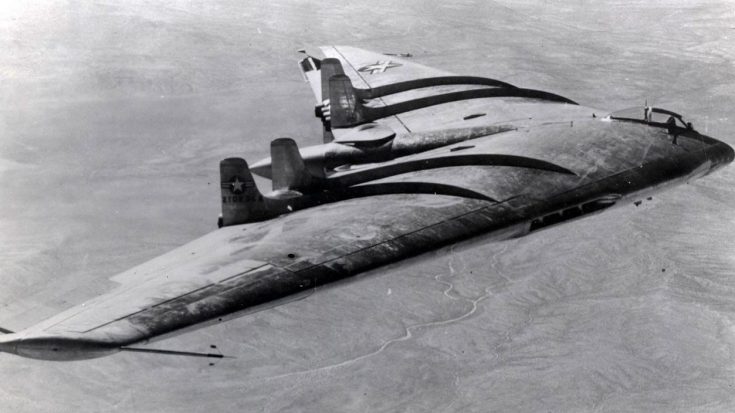 Bomber planes formed the backbone of the United States Army Air Force launching attacks that could decimate entire cities and armies. However, the weakness of these bombers was that they were slow they needed support from fighters to deter hostile planes. A high-speed bomber was finally realized shortly after WWII in the form of the Northrop YB-49.

Designed from a converted YB-35, the YB-49 was a vast leap forward to wing bombers. It was able to fly at speeds of almost 500 mph, much faster than the B-29 bombers of the time. Its wing shaped body gave it a smaller target area making it difficult for hostile fighters to attack. The wing design also made it difficult for the YB-49 to be picked up on radar, in a way making it America’s first stealth bomber.

“And so two B-35s then under construction were converted to YB-49s. Eight jet engines replaced the four propeller engines, vertical fences and fins were added for stability, and two of the bomb bays were converted to fuel tanks.”

It was an incredibly easy plane to handle, probably the most maneuverable aircraft built at the time. Able to enter long-range missions for bombing as well as reconnaissance. Unfortunately, the YB-49 suffered a fatal crash on June 5th, 1948 killing test pilot Captain Glen Edwards. Edwards Air Force Base in Lancaster, California is named in honor of his memory.

The YB-49 was the wrong plane at the wrong time but helped to bridge the gap between propeller aircraft and jet propulsion. There is no denying that the YB-49 also influenced the development of the Northrop Grumman B-2 Spirit. Archival footage of pilots in test flights with the Northrop YB-49 can be seen in the following link.