These Loadmasters Aren’t Afraid Of ANYTHING 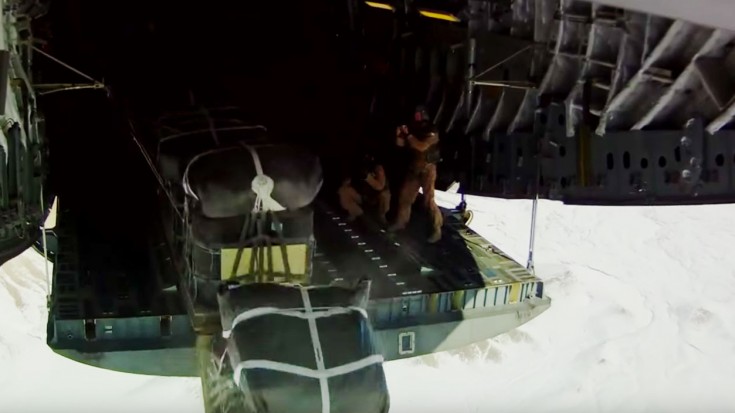 A Cool Video With A History Lesson As Well!

First off, these guys do this stuff everyday. It’s their job and they’ve been trained for this and we say this before anyone beats us to it. However, to an average person, what these guys do is completely insane and they wouldn’t be able to do it.

Think about it for a second. They’re standing inches from the edge of the rear cargo doors flying thousands of feet above the ground. They only thing that’s holding them is a harness and strop and although they’re approved for whatever incident might occur, admit that your knees might be a bit wobbly nonetheless.

The plane that is dropping all these goodies is the C-17 Globemaster III.

Also, the tons of cargo they’re dropping is dangerous as can be. It’s all on rails and fixed and calculated, but when you watch that video, notice how fast they’re leaving the plane. Now imagine the countless mishaps that could happen and how those harnesses would help you. The answer is probably “not much.”

Now that we got that out of the way and agree these men and women are pretty brave, it’s time for that short history lesson. The type of operations featured in this video, meaning airdrops of course, were invented during World War II. As planes were used heavily during this war and troops were dropped deep into hostile areas with no friendly airbases, airdrops were developed to resupply them. It’s as easy as that. There was a lot of trial and error when it came to the type of parachutes and weight calculations that would make this work, but what you’ll see below here was a direct result of those experiments.