This Ace Pilot Shot Down Germans, Italians, Japanese And… An American? 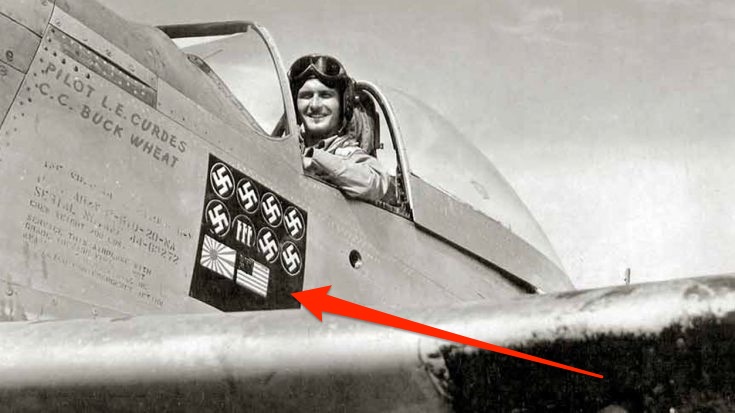 Lieutenant Colonel Louis E. Curdes is an ace who accomplished a feat that no other pilot would achieve during World War II. Lou Curdes joined the war effort on March 12th, 1942 and took up flight training at Luke Field, Arizona. By April 1934 Curdes became a Lieutenant and was went abroad to Europe to join the 95th Fighter Squadron. On his first mission flying a P-38 Lightning, he shot down five German Bf-109s and another two the following week. Not many pilots can claim that they became an ace on their first mission, but Curdes was just warming up.

While escorting a B-25 over Italy, Curdes came to the rescue of an American fighter up against five Bf-109s. He shot down two enemy fighters before taking damage, crashing and captured by the Italians. He would spend the next few weeks in a POW camp until Italy surrendered and Curdes made his escape. After months behind enemy lines, the Allies came to his rescue, awarded a purple heart and sent home to Indiana. However, as the war raged on Curdes was eager to return to the skies as a combat pilot.

Despite objections from his parents and even the U.S. Army Air Force Curdes could not sit out of the war. He joined the Army Air Forces in the pacific, this time in a P-51 Mustang named Bad Angel. On February 10th 1945 during a reconnaissance mission, Curdes noticed a C-47 flying erratically towards a Japanese occupied airstrip. He tried as best he could to signal the plane but his efforts were futile. Fearing for the safety of the passengers onboard the C-47 Curdes made a last-ditch effort to save their lives.

“Audaciously, he lined up his P-51 directly behind the transport, carefully sighted one of his .50 caliber machine guns and knocked out one of its two engines. Still the C-47 continued on toward the Bataan airfield. Curdes shifted his aim slightly and knocked out the remaining engine, leaving the baffled pilot no choice but to ditch in the ocean.”

As luck would have it the C-47 was low on fuel and simply looking to land in a safe location. The passengers onboard made it to safety, including a nurse named Valerie who would end up marrying Lou Curdes. For his heroism an American flag is seen on the side of Bad Angel, thus he became the only pilot to shoot down German, Italian, Japanese and American planes.