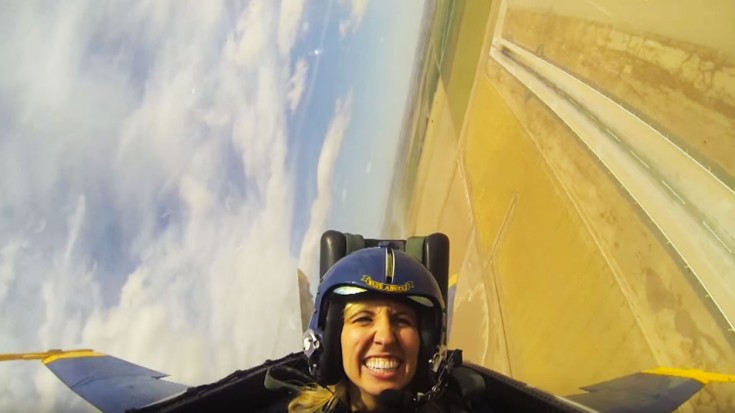 The Blue Angels give away three seats during almost everyone of their shows. Always in the back seat of the Number 7 jet, some lucky people get selected through the Key Influencer program.

Two spots go to “individuals who shape attitudes and opinions of youth in their communities,” while the third goes to a member of the media. The whole idea is to promote the skill and discipline of the Navy and give back to the community.

Once selected, you don’t simply get strapped into the back seat. As most of you know, The Blues pull massive Gs during their flights, so passengers need to be briefed on the equipment as well as the “hick maneuver.” This trick allows you to stay conscious during the flight, as it forces blood back into your brain so you don’t lose copiousness, or, G-LOC. Do it wrong and you’re out cold for a few seconds.

That’s what happens here. A drag racer by the name of Courtney Force got selected to fly in the back seat, but couldn’t take one of the turns.

Now, as a drag racer she’s used to pulling quite a few Gs herself, as the rapid acceleration of the dragster is quite abrupt. Still, this was a bit much for her and honestly, most common folk probably couldn’t take that either.

Still, people passing out in the back seat of Number 7 is always funny though. Also, great job to Courtney who kept a smile the whole time, even after she passed out.