This Is A Terrorist Hut Before The A-10 Brrrrts It 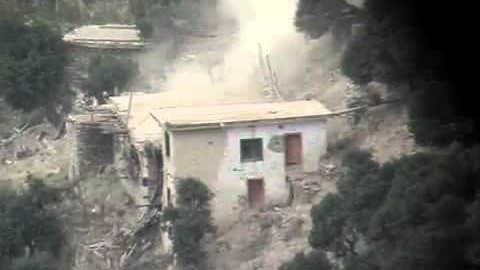 After The Warthog Came Down, It’s A Whole Different Story

When an A-10 is called in for close air support, there is really nothing you can do to save yourself. A tank buster by design, the Hogs bullets are meant to penetrate armor, so hiding inside of a meager hut is equivalent to standing outside in an open field. At 70 rounds a second with a four second burst, the hut you’ll see in this video was hit by approximately 280 30 mm bullets. Anyone inside must have been obliterated.

Korengal is a 2014 documentary film that examines experiences of soldiers that were stationed in one of the most dangerous outposts in Afghanistan.

This short clip demonstrating the power of the A-10’s GAU-8 Avenger gatling gun was taken from a documentary named Korengal, which is a continuation of an earlier film named Restrepo. Filmed between 2007 and 2008, the directors decided to pick this setting for the documentary as it was one of the worst places to be stationed in Afghanistan. Within a few short years, forty two soldiers were killed on those hills before being pulled out. Because of that, some of the strongest bonds were formed among them, making for one compelling documentary everyone should watch.