This Is What Caused US Army Soldiers To Mutiny After WWII 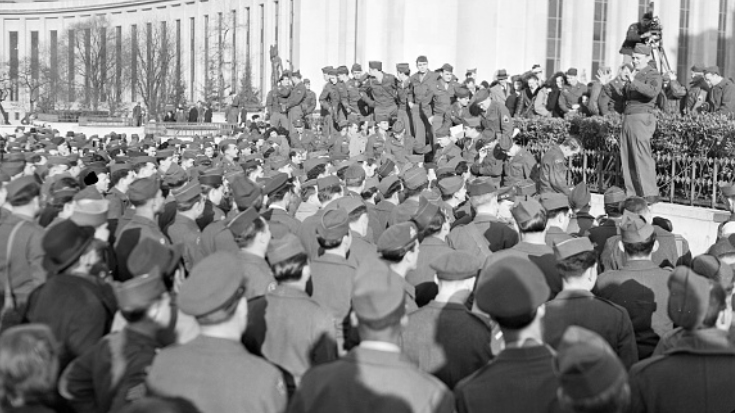 Following the end of WWII, morale was at an all-time high for the soldiers who helped defeat the Axis Powers. The world was free of the tyranny Nazi Germany, Imperial Japan and working towards a brighter future. It comes as a shock that there was, in fact, a mutiny of US soldiers after the Allied victory of World War II.

After achieving victory, a good exit plan is necessary to bring tired and weary troops back home to their families. Following the fall of Nazi Germany over 1,000,000 American troops were taken back home. However, in the Pacific Theater of War American soldiers were not granted the same luxury.

The demand for US soldiers returning stateside far exceeded the capacity to bring them home. The US Navy dedicated 26 cruisers, 10 aircraft carriers and 6 battleships for the purpose of transporting troops. However, the demand for troops to return home by Christmas far exceeded the US Navy’s capability to do so.

The lack of momentum actually caused a large scale protest of some 20,000 overseas troops. A group of 500 protesters even confronted Eleanor Roosevelt and became so severe that General Eisenhower had to step in.

“They are good boys, but if they don’t have enough to do, they’ll get in trouble. That is the nature of boys, I’m afraid.”

Although Eisenhower cited “acute homesickness” as the cause of the mutiny, but threated anyone further demonstrations with court martials. Demobilization was sped up, but there were some who were critical of this process.

“[A] state of near impotency,….weakened the prestige of our national policy, and endangered the security of the Nation.”

– On rapid reduction of overseas forces.

The mutiny was short lived but fortunately, remnant forces of Imperial Japan were compliant with Americans as General MacArthur and Emperor Hirohito worked together. It taught the United States a valuable less in exit strategies and bringing hard-working soldiers home.