This RC Me 262 Is Impressive, But The Pilot’s Skills Are Even More So 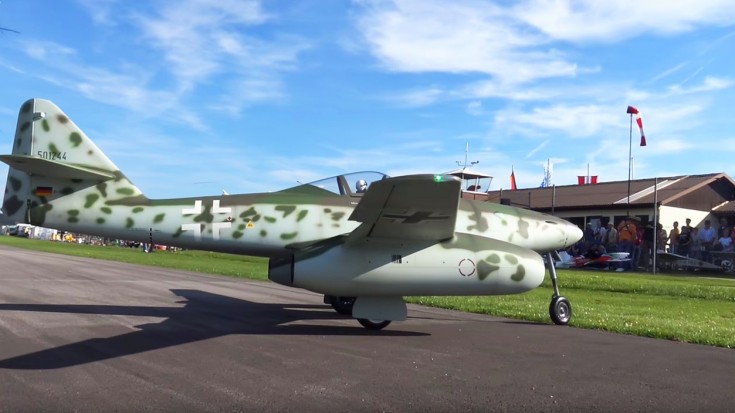 It’s One Thing To Build It. It’s Another To Fly It Like That.

This wonderful piece of engineering came to us from Germany. Built by Roy Puchtinger, this 1/4th scale Me 262 is one of the biggest ones we’ve found so far, if not the biggest one in the world. Weighing over 53 pounds, it has a wingspan of over 10 feet and length of 9. It’s powered by 2 JetCat P100RX engines which produce 22.5 pounds of thrust. These babies alone cost $2,500 USD each, with the whole setup costing most likely in the tens of thousands.

The Messerschmitt Me 262’s name is Schwalbe/Sturmvogel which translates to Swallow/Storm Bird in English.

The reason this Rc is so special is not only because it’s so big and powerful, but also because it’s a replica of the first operational fighter jet in the world. With only 1,430 of them produced at the tail end of World War II, only a few replicas are airworthy as of this writing. What’s more, when they were introduced into the fight, they had a top speed of 559 mph, over 100 mph higher than any other existing fighter of the era. We salute Roy for putting this beautiful piece of history together and having it so expertly recorded in action.