Thunderbirds Reunite For An Unforgettable Show In The Mountains 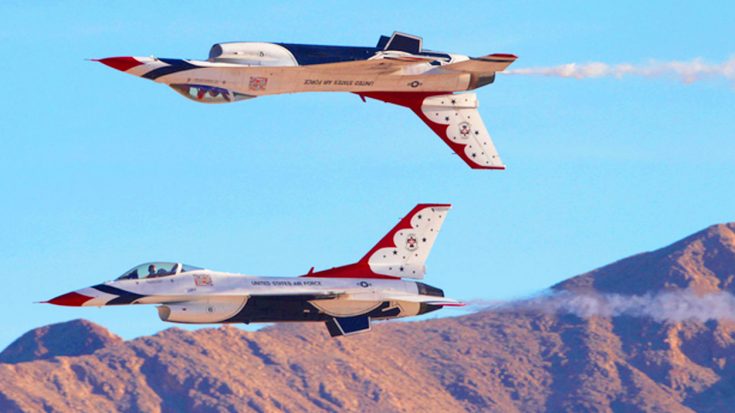 Since the early 1950s, there have been few aerobatic jets teams quite as impressive as the USAF Thunderbirds. They have flown many jets since their formation in 1953, ranging from F-84G Thunderjets, F-4 Phantoms and T-38 Talons. Now the F-16 Fighting Falcon is the latest to wear the proud red, white and blue colors of the Thunderbirds.

America’s ambassadors in blue have entertained millions of fans over the course of 60 years. Their iconic jets flying faster than the speed of sound draw in huge crowds as they perform death-defying stunts.

“Millions of people have witnessed the Thunderbirds demonstrations, and in turn, they’ve seen the pride, professionalism and dedication of hundreds of thousands of Airmen serving at home and abroad. Each year brings another opportunity for the team to represent those who deserve the most credit: the everyday, hard-working Airmen voluntarily serving America and defending freedom.”

Nellis Air Force Base in Southern Nevada hosted the Aviation Nation Air Show and the Thunderbirds stole the show. These powerful F-16s with the legendary bird colors gave an unforgettable performance in this clip.