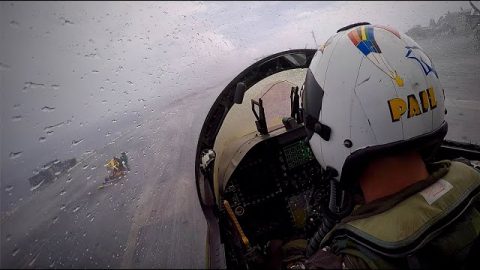 Can you imagine what it would feel like to do a catapult launch during a thunderstorm? Well, this video almost made us virtual wingmen in this EA-18G Growler as it tries to take off despite the bad weather.

In this catapult shot off the TR (CVN-71) somewhere near Guam during a training sortie, rain starts, and the winds pick up. Most ships drive toward inclement weather. A little later, the winds start to intensify, making it difficult for the pilot to see beyond the bow. Fortunately, according to the pilot, it was just an isolated storm, and they passed it quickly.

We also love the fact that the pilot instantly went flying in the end, showing what a skilled aviator, he was, controlling his plane confidently despite weather conditions. This was simply spectacular to watch!