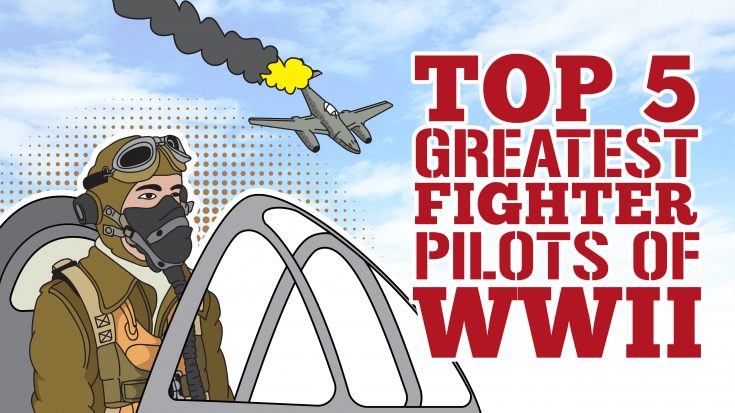 World War II saw countless battles in the skies above the Pacific and in Europe. It is estimated that over 40,000 pilots lost their lives in aerial combat in the 6 years of war. Those who fought will be remembered, but there are legends who stand above the others. Let’s take a look a the Top 5 Greatest Fighter pilots of WWII and the endeavors that made them legends.

With 40 aerial victories, Richard Bong was America’s “Ace of Aces” more than any other US pilot during WWII. Bong joined the Army Air Corp in 1941 studying under Captain Barry Goldwater (future Arizona Senator and Presidential Nominee).

Flying a P-38 Lightning in missions over the Pacific he took down a down a down an A6M Zero and a Nakajima Ki-43 near Papua New Guinea to earn Silver Star. He continued campaigns against the Japanese throughout the Philippines racking up 40 victories. In December of 1944, General Douglas MacArthur awarded Bong the Medal of Honor for his success in the Pacific Theater of War.

After his service in WWII Richard Bong became a test pilot for the for Lockheed. On August 6th, 1945 while testing the P-80 Shooting Star the jet malfunctioned and crashed into a field killing Bong upon impact. The world mourned his loss and was prominently featured in newspapers alongside stories of the atomic bomb dropped on Hiroshima occurred on the same day.

Josef František may not be a household name but his feats as a fighter pilot are legendary. Originally part of the Czechoslovak Air Force he transitioned the Royal Air Force as the Germany began their bombing raids. During the Battle of Britain, his plane of choice was the Hawker Hurricane a big step up from Bk-534 biplane he flew in the 40th fighter squadron at Prague.

František was not fond of taking orders and often broke away from squadrons to fight on his own. Superior officers disliked his tactics but he successfully scored 17 kills making him the top ace of the Battle of Britain. For his heroics, he was awarded the Distinguished Flying Medal but sadly he wouldn’t live long after he died in a crash while performing aerobatic stunts for his girlfriend.

The Samurai of the Sky, a title he rightfully deserves after 64 claiming victories. He is easily the most famous of all Japanese fighter pilots for his skill and devotion to aerial combat. Joining the Japanese Navy at age 16 he was one of 70 students accepted into flight training of out 1,500 applicants. Graduating at the top of his class in flight school, where he fell in love with the Mitsubishi A6M Zero.

He never had a dull moment as a pilot, risking his own life time and time again. He once flew a mission over Iwo Jima against 28 F6F Hellcats for a period of 20 minutes and returned to base without taking a single bullet. On his most legendary mission, he took bullet fire blinding his right eye and paralyzing the left side of his body. Against all odds and life-threatening injuries, he flew over 600 miles back to the Japanese base and even refused treatment until he reported to his superior officer.

After the World War II ended, Sakai became a Buddhist vowing never to kill a living creature ever again. Sakai was descended from a Samurai and has a deep respect for fellow soldiers and even Americans. He would travel to the United States to meet with pilots he had engaged in dogfights, including Harry Jones the pilot who blinded his eye.

James Howell Howard only had eight aerial victories but one them became the most legendary aerial battle of WWII. On January 11th, 1944 Howard flew in a P-51 as a lone escort to a group of B-17s over Europe. Suddenly a group of 30 German fighters came across the horizon to attack the bombers. Facing near impossible odds Howard jumps into the battle to defend bombers, shooting down five Bf 109s. When he finally ran out of ammunition he began dive bombing the enemy fighters until he finally scared them off. In the end, he suffered only one bullet hole in his P-51.

An incredible fighter in the hands of an amazing pilot performing a miracle of aerial combat to save his escort. For his magnificent efforts, James H. Howard became the only pilot in the European Theater of War to receive the Medal of Honor.

With a staggering 352 aerial victories, Erich Hartmann is the top ace of Word War II. Flying in his Messerschmitt Bf 109, few enemies could provide a challenge the to the legendary pilot. Bestowed the title of The Black Devil by the Russians and decorated as Germany’s top fighter pilot, he earned Knight’s Cross of the Iron Cross with Oak Leaves, Swords as well as Diamonds presented to him by Adolf Hitler.

German pilots did not have the luxury of sitting out fights over their homeland Hartmann flew over 1,400 combat missions. Hartmann learned not to fear Russian pilots but had a greater respect for Americans due to their superior technology.

His technique brought him into the fray against other pilots and wouldn’t fire until he was so close that he nearly crashed into them. A simple yet very effective technique allowed Hartmann to conserve ammunition and acquire a larger target area against enemies. Even claiming his final aerial victory against enemy fighters as Russia overtook Berlin he fought to the bitter end. Erich Hartmann was untouchable as a pilot and he has gone down in time as the greatest pilot of World War II.