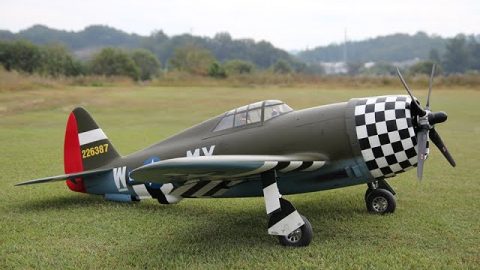 As far as RC planes go, this P47 model is highly detailed and functional for its size. It is based on the actual P-47 Thunderbolt, an actual World War II fighter aircraft that was considered one of the toughest Allied planes as far as WWII is concerned. It is well known for its fighter-bomber ground-attack role, and its eight .50 caliber guns in its wings (34,000 rounds.) Additionally, the plane could also carry a bomb load of up to 2,500 lb.

The RC P47 on the video was a combination of a Vario propeller and a Moki 180 engine. After doing several trial runs, the model was able to take off beautifully into the air, and make a landing afterward. What do you think about this P-47 maiden flight?