Triple Flyby – SBD Dauntless, Wildcat And One Of The Last Remaining A6M Zeros 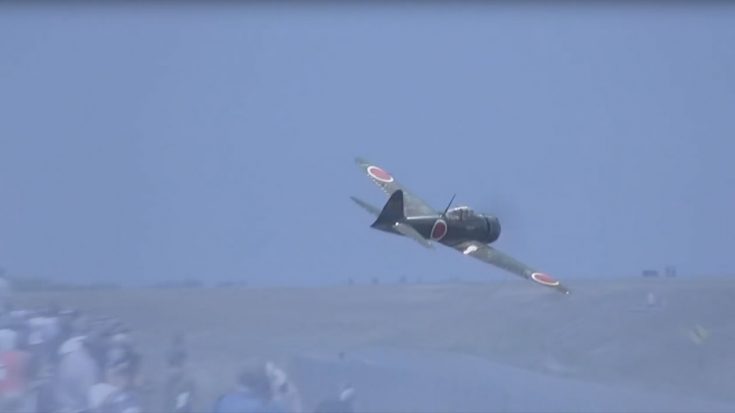 Three of the most infamous warbirds of WWII took on the crowds at SkyFair to prove they’ve still got it. The first is an A6M-22 Zero from Commemorative Air Force SoCal, also one of five flyable Zeros in the world. The next is a fighter rather uncommon to airshows, the SBD Dauntless from the Erickson Aircraft Collection in Madras, Oregon. Finally, we see a Goodyear built Grumman FM-2 Wildcat also from the Erickson Aircraft Collection. All of these planes have a remarkable history of combat as well as their recovery and renovation.

“[The Commemorative Air Force Southern California’s] Zero was delivered to the Imperial Japanese Navy Air Group #3. The aircraft was recovered from Babo in New Guinea in 1991, partially restored from several A6M3s in Russia, then brought to the United States for completion of restoral.”

“The [Erikson Aircraft Collection]’s Wildcat is a General Motors built FM-2 accepted by the Navy on 26 July 1945 and transferred to Naval Air Station Tillamook to be put into storage. Stricken from the Navy’s inventory in 1946, it was sold to the Wolf Point Montana School District in 1955 for $38.20 and later sold to a private owner in Washington State for $208.60. Before coming to the museum’s collection for restoration in 1991, it was owned by several individuals and used for various activities including agricultural spraying.”

“[The SBD Dauntless] is an A-24 Army Banshee delivered in January 1943 and used as a gunnery target tug at Lakeland Air Field in Florida. Later declared surplus, it was employed as a mosquito control sprayer by the City of Portland from 1958 until 1965. It was sold to the museum in 1994 and restored to an SBD-3 as it appears today.”

SkyFair is the Flying Heritage Collection’s biggest annual event bringing in aircraft from museums across the country. Soaring above their adoring public and diving down these planes are still on top of their game.