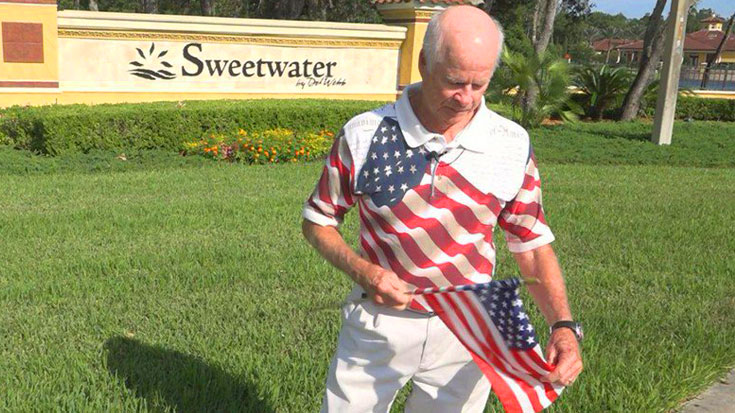 Larry Murphree is a veteran of the United States Air Force who worked for many years as an air traffic controller. After serving his country, Murphy retired and settled into the Tides Condominium Association in Sweetwater, Florida. He lived a quiet life and proudly displayed an American Flag in front of his home, but that raised some issues.

The local Home Owner’s Association deemed that American Flag to be a “foreign object” in violation of their policies. The small American flag in a flower pot caused Murphy to be fined $100 per day. He then took to court and arranged a compromise with the HOA. However, the wording was changed and he continued to be fined for displaying the flag.

Apparently, while Florida and federal laws allow for the display of the U.S. flag, associations are allowed “reasonable restrictions” and the HOA found they could change the wording so that only plants were allowed in planters…not flags.

As a result of the continued fines, he was forced to sell his home at a what he claims to be “a major loss” to avoid foreclosure.

“It just dawned on me there are people that strap on a gun every day to protect me and the people I love. It’s a small flag, but it stands for a big ‘thank you’.”

Larry isn’t one to buckle under pressure though. He now has a court date set for this year after a seven year battle. Where do you stand on this issue? Should a veteran have to lose his home over a small flag? First Coast News provides additional information and an interview with Larry Murphy in this clip.