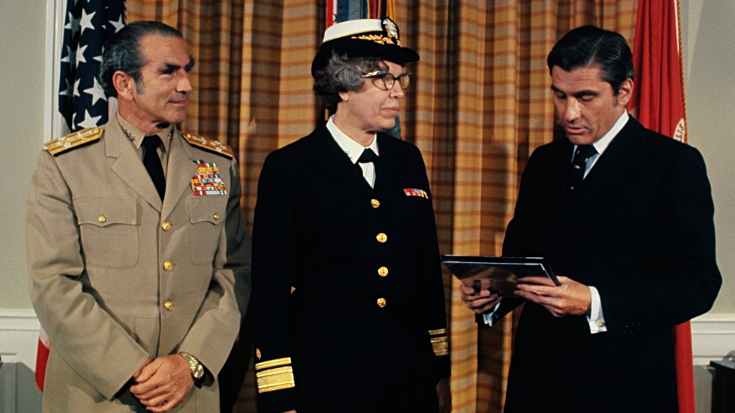 Alene Duerk began her time in the US Navy as a nurse in 1943 to aid in WWII. She only expected to stay with the Navy for a six month period. However, she loved it so that she became the first woman to attain the title of Rear Admiral. After a career that spanned decades and influenced countless people, Rear Admiral Alene Duerk has passed away at age 98.

As a young girl, Alene Duerk’s father suffered many health problems and nurses were a common sight around her home. Duerk’s father passed away when she was four and afterward she was inspired to be a nurse. She boarded US Navy hospital ships set out for Japan to help wounded soldiers, but the atomic bombs had already been dropped and the war was coming to a close.

“We pulled into Japan when the peace treaty was signed, and we helped evacuate the P.O.W.s — a very moving experience.”

There were some limitations on which prevented women from rising in the ranks. Fortunately, President Johnson signed a bill in the late 60s allowing women to be promoted to higher ranks in the US Navy. In 1972 she was chosen from a group of 24 people to be the first female Rear Admiral of the US Navy and used the role to inspire women to join their ranks.

“It was a nice distinction to have and to be recognized as the first but I wanted to make certain that I used that notoriety to do as much positive as I could.”

Although she retired from the US Navy in 1975 she never stopped inspiring women to be more than she could. Rear Admiral Duerk, thank you for your service and for helping so many.