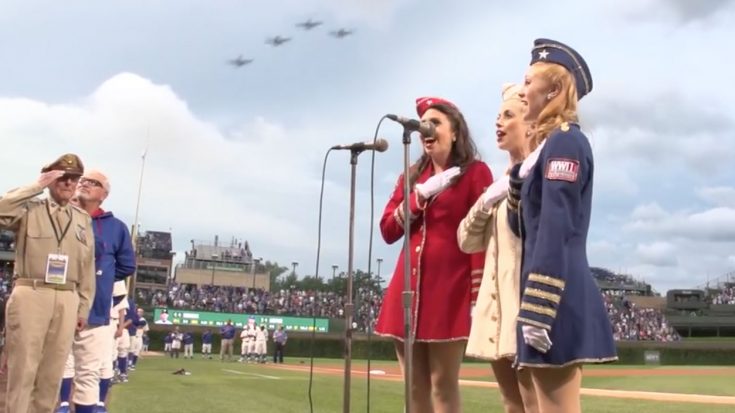 Nothing raises an American’s sense of patriotism more than the sound of the Star Spangled Banner. Well, maybe until now. Hearing the anthem sung by the Victory Belles might be the apex of what feelings this song can stir in your heart.

The Victory Belles are a trio of incredibly talented gals who travel around the United States singing music from the 1940s. They do so to pick up the spirits of past GIs and keep the patriotic sentiments of the 40s alive.

Their harmonized renditions include Boogie Woogie Bugle Boy, Don’t Sit Under the Apple Tree, Chattanooga Choo Choo and I’ll Be Seeing You. To the surprise of many, they can be booked for private parties by going to their website here.

The video below was taken in 2015 at a Chicago Cubs vs Detroit Tigers game at Wrigley Field. The field seemed to be in complete awe as they sat silently mesmerized by their talent and exploded with cheers when they finished.

To wrap up the performance in an old-fashioned way, four P-51 Mustangs flew overhead. For those of you not versed in aviation, they were one of the premier U.S. fighter planes of World War II.