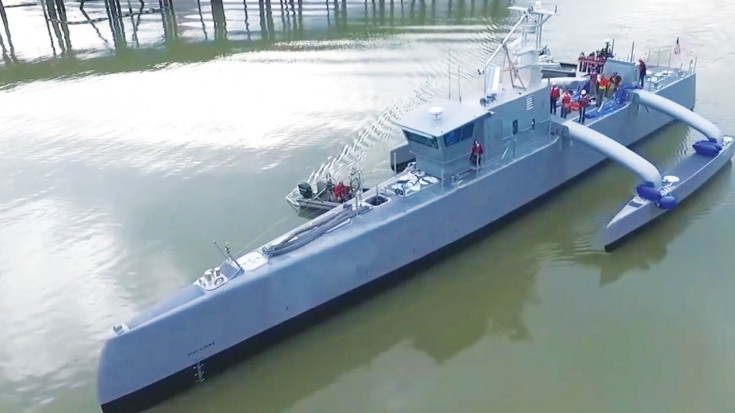 A New Type Of Drone Is Born.

It’s incredible that in just a few decades we’re seeing the advent of technologies that were only in movies up until recently. We’ll venture out a guess that these movies were basing their “fake” technologies on things that were already in the works if not operational, but us common folk didn’t know about them yet. We’ll just leave that out there for now.

As for this breakthrough, we’ve now left self-driving cars and self-refueling drones (see X-43) and now we’ve moved onto the open waters.

What you’ll see in this video is an entirely new class of warship. DARPA (Defense Advanced Research Projects Agency) developed the first unmanned and totally autonomous warship. Yes, you read that night. No human input, just radars and gadgets to guide this thing around the world and get rid of threats.

For now, Sea Hunter as it was named, is going to be floating around San Diego for two years to see how its systems interact with other vessels in the area. The point is for it not to crash into anything of course, so just as a precaution the vessel will have a human counterpart on it in case things go awry.

As for its purpose, the Pacific is a big place to patrol and with China and other countries putting more submarines in the water, the cost of tracking them is immense. There is also the growing threat of pirates in international waters as well.

The operational cost of a destroyer, for example, is about $700,000 per day according to Science.DoDlive.mil. For just $20,000 a day, this autonomous vessel will be able to scan the waters for subs as well as mines and any other possible threats. According to the Navy’s press release, once the navigational testing is complete these vessels might be armed to make them ready to take out any imminent threats if necessary.

Welcome to the new world.