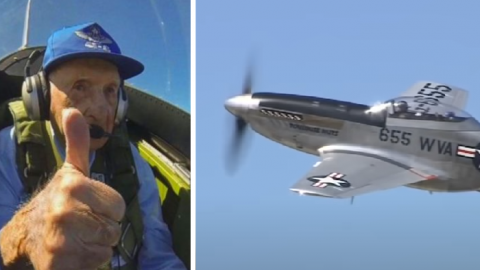 Bob Brocklehurst doesn’t move as quickly as he used to, but when it comes to P-51 Mustangs he’s still got it. He has plenty of experience in planes after he spent 30 years in the US Air Force, but Bob has a soft spot for the Mustang. Now the 96-year-old WWII veteran was given a chance to hop in his favorite plane and take to the skies again.

During World War II Brocklehurst flew P-51s through two tours in Alaska, combatting Japanese forces in the area. The kind folks from the Wings of Freedom Tour brought Bob along as they stopped in Florida and he was right at home flying in that plane.

“Just made me feel right at home. It’s like putting the car in the garage. You do it without thinking.”

His air time certainly brought back a lot of memories about his time as a pilot and he looks so at ease in that plane. Bob Brocklehurst is a true national treasure that wants the younger generation to appreciate the hardships of WWII and to celebrate its history. Fox 13 Tampa Bay covers the Bob Brocklehurst’s triumphant return to the skies in this exciting video clip.