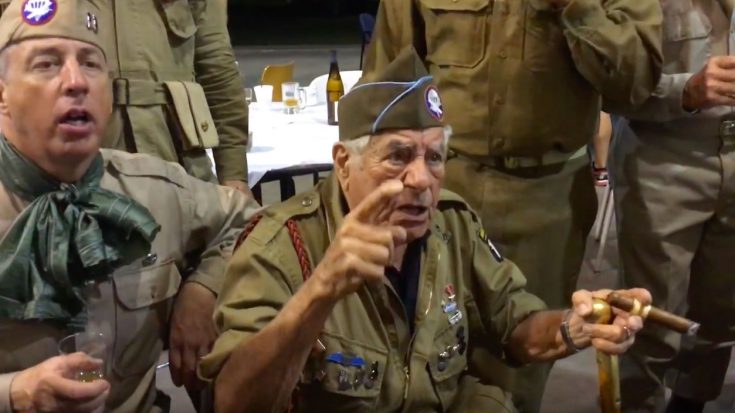 Vincent Speranza is a WWII veteran who has gone down in history and did not realize it for most of his life. These days he serves as an inspiration for airborne units telling the story of his heroism. However, he does have some unique talents and quite the story that led to him being a living legend.

Vincent served in the 101st Airborne Unit taking part in the Battle of the Bulge. His unit was surrounded by German troops and many of his comrades were injured. While they were holed up inside a church used as a makeshift hospital he asked a wounded soldier if he would do anything to help.

“Yeah, go find me something to drink.”

Without hesitation, Vincent Speranza ran off to a nearby tavern amid all of the heavy gunfire. He found a beer tap that still worked and took off his helmet and poured in a drink. He returned to the hospital to serve drinks to the wounded while getting screamed at by superiors for serving drinks out of his helmet. The story of his brave actions was spread around as a local legend throughout Belgium.

Speranza returned to Belgium on the 65th anniversary of the battle and began a conversation with some locals. The locals were shocked to find the man they were speaking to was the legendary soldier with the helmet full of beer. And to Speranza’s amazement, he found that they brewed a beer in his honor and served it in ceramic helmets.

Beers are great but they go better with some drinking songs and as you can see from this video, Vincent is quite the singer.