Yakovlev Yak-9 Showing Off What Its Got 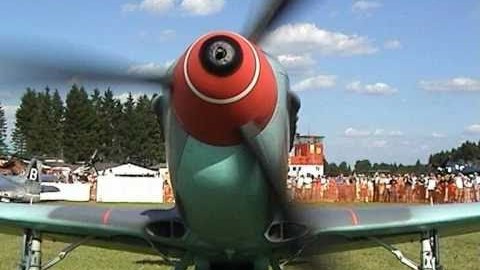 The Yak-9 as it was known, was the Soviet Union’s single-engined fighter aircraft that was a much improved version of its predecessor, the Yak 7. One of the most notable improvements other than the lowered rear fuselage decking was its canopy, allowing the pilot to see all around him. It was the Soviet’s most produced fighter aircraft, with over 16,000 being made from 1942 to 1948.

A series of continual improvements in performance and armament did not hamper the superb handling characteristics that allowed its pilots to excel at dog-fighting. Soviet pilots regarded the Yak-9’s performance as on the same level as the Bf 109G and Fw 190A-3/A-4.

From October to December 1944, the first Yak-4U fighting unit was deployed. In 398 sorties, the Yaks shot down 28 German Focke-Wulf Fw 190As in dogfights while losing only 2 of their own. This aircraft was the Soviet Union’s top fighter, helping it establish a strong air presence during World War II.