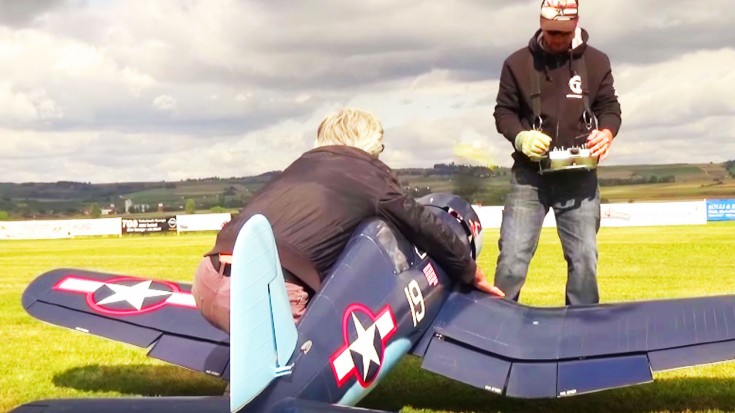 Great Choice On The Warbird Man!

There are toys and there are big boy toys. This one is obviously the latter. Probably costing in the tens of thousands of dollars, when you fly one of these babies, you better know how to do so. As you’ll see, this guy does.

This video was taken during an RC Model Airplane airshow in Schmerlat, Switzerland. Drawing some of the best modelers and pilots from Europe, this awesome Corsair also made an appearance and was recorded very well. From the start up to a beautiful landing, this thing whipped around like a charm.

If you notice the nose art on this Corsair, her name is Marine’s Dream. We tried to trace the real Corsair back to her roots but have only found limited information.

She was originally manufactured with the Bu. 92471 but the year and factory are unknown. She first resurfaced in 1990 when she was bought by Harry & Diane Tope who started her restoration. Changing hands over the next few years, she first flew again in May 2000. She was then purchased by Tom Duffy five years later under the name Marine’s Dream.