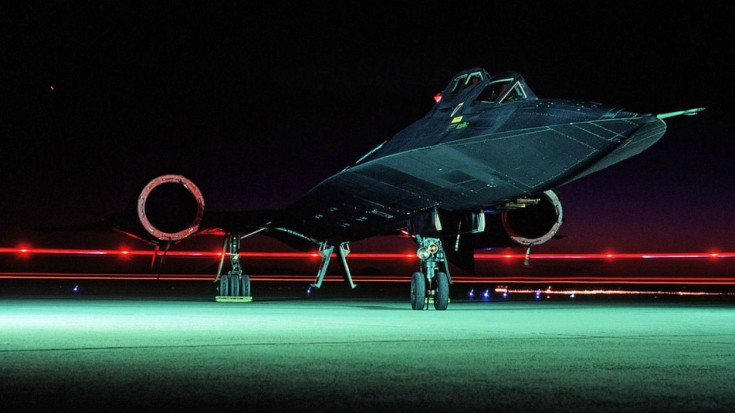 This Is One Of The Most Coveted Planes Of All Time.

The SR-71 is the fastest plane ever created. Just 17 years after we broke the speed of sound with the X-1, Lockheed created an aircraft able to reach Mach 3.3 or 2,200 mph. During its service it was given several nicknames including Blackbird and Habu. It was designed as a strategic reconnaissance aircraft at the request of the CIA and was in service from 1966 to 1999. It was also used jointly with NASA as well for flight research.

These are the basics of the SR-71 that most of you already know. For this reason, we compiled some lesser known facts about this engineering wonder. Hopefully you’ll learn something and stun your friends with some of these tidbits.

1. You Had To Be Married

This is a strange yet smart one. In order to fly or even work on the SR-71, you had to be 25-40 years old and ’emotionally stable.’ With the technology used and mission types being top secret (although the existence of the actual plane wasn’t), extra precautions were taken. Being married was a requirement as it showed maturity (they didn’t want any Mavericks) as well as a tie to the U.S.

If you were married, you’d be less likely to defect or be willing to put your family in danger (especially if you have kids). Also, as a bachelor they didn’t want you to be picking up ladies and showing off by telling them about the shiny black Mach 3 plane you were flying. Now that makes total sense. Everyone would be willing to listen to Blackbird stories which would kind of defeat its purpose of being a spy plane.

2. The Flight Suit Itself Was Just As Complex As The SR-71 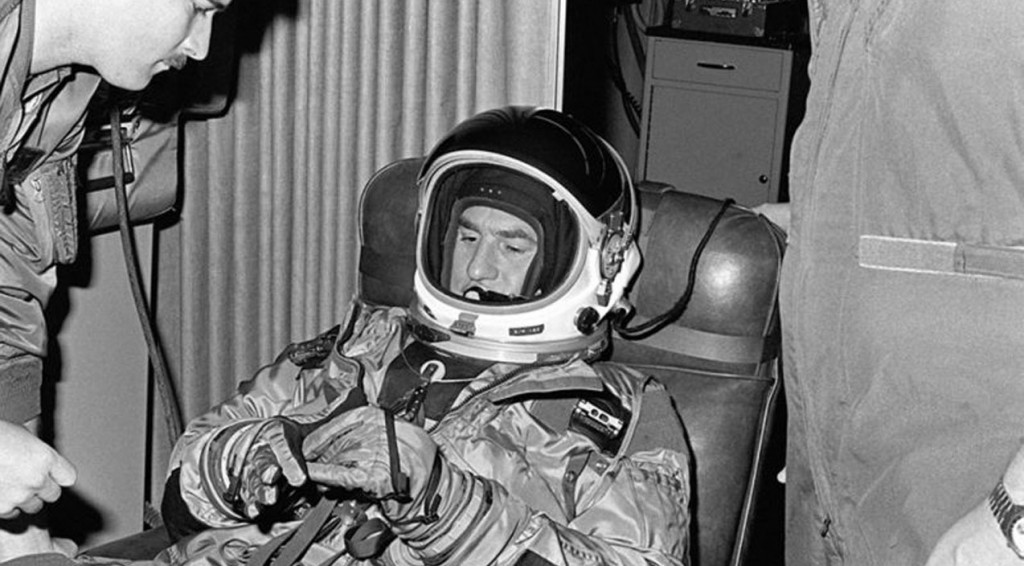 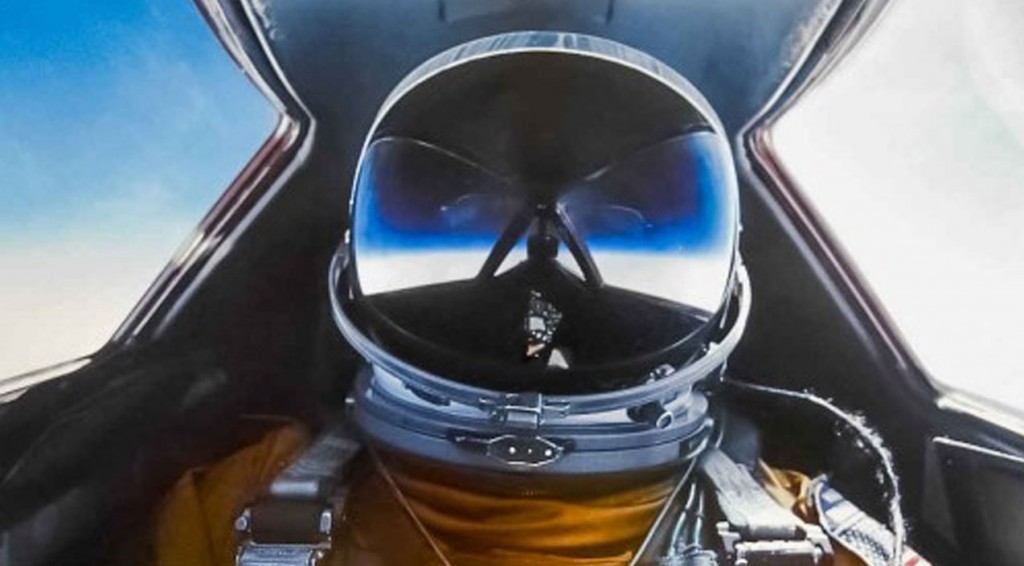 As you can imagine, flying over 2,000 mph at 80,000 feet brings a whole lot of physics with it. With no air and extreme temperatures, engineers had to devise flight suits that were equal to NASA’s Apollo suits. It has four basic layers: comfort liner, bladder/thermal layer, outer mesh and outer cover. And in case of cabin decompression or an emergency ejection, the specialized pressurized suits (appropriately called The Pilot Protective Assembly) protected pilots from certain death.

Because there’s the possibility of being subjected to 230 degrees Celsius temperature which is no longer hospitable to human life, it contains its own oxygen system in a self-contained capsule. If the suit wasn’t connected to the aircraft cooling system, like when the crew needs to wear it for missions, a portable cooling system is needed to be used. Basically, everything has been done here to save the crews’ lives from extreme altitudes and harsh atmosphere.

3.The Cockpit Was Entirely Analog 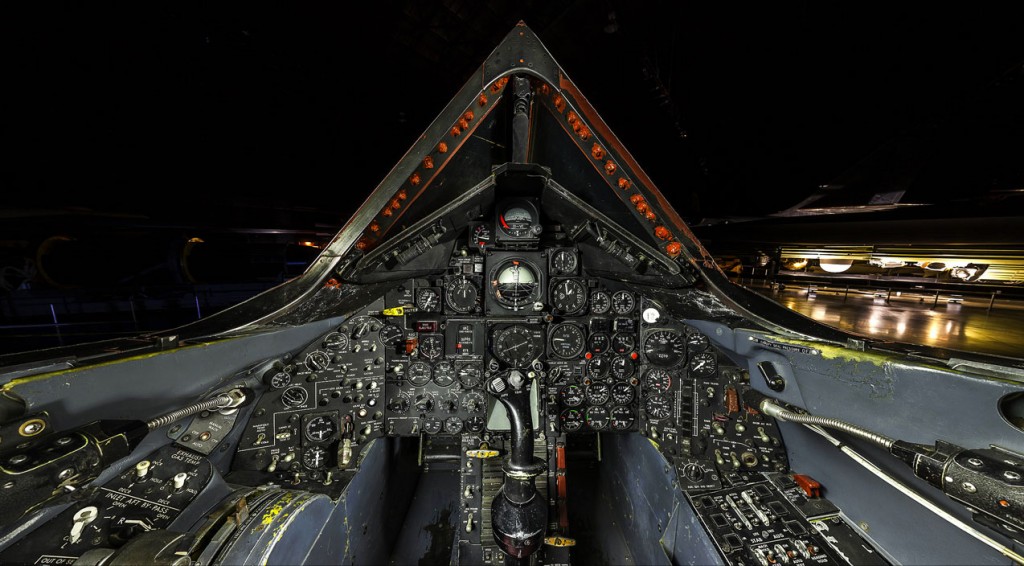 This Was Built Back In The Day- Before Digital Age

Although significantly advanced for its time and still one of the finest spy planes ever made despite retiring way back in 1999, the Blackbird was still too early for computer systems to be installed in the cockpit. Costing $34 million per plane, all the instruments were still manual like on World War II aircraft. Perhaps it’s the only thing that’s a bit out place in this amazing aircraft.

It’s revolutionary and groundbreaking in so many aspects and still holds the world record as the fastest plane since the Lockheed YF-12. With all the futuristic technology integrated in the manufacturing of the Blackbird, the analog computers somehow became a stand out. But then again, it’s not like it hindered the SR-71 from playing a very significant role in history. A US Air Force major and former Blackbird pilot once called it a “107 feet of fire-breathing titanium” which couldn’t be more accurate.

4.The Windshield Was Made Of Quartz 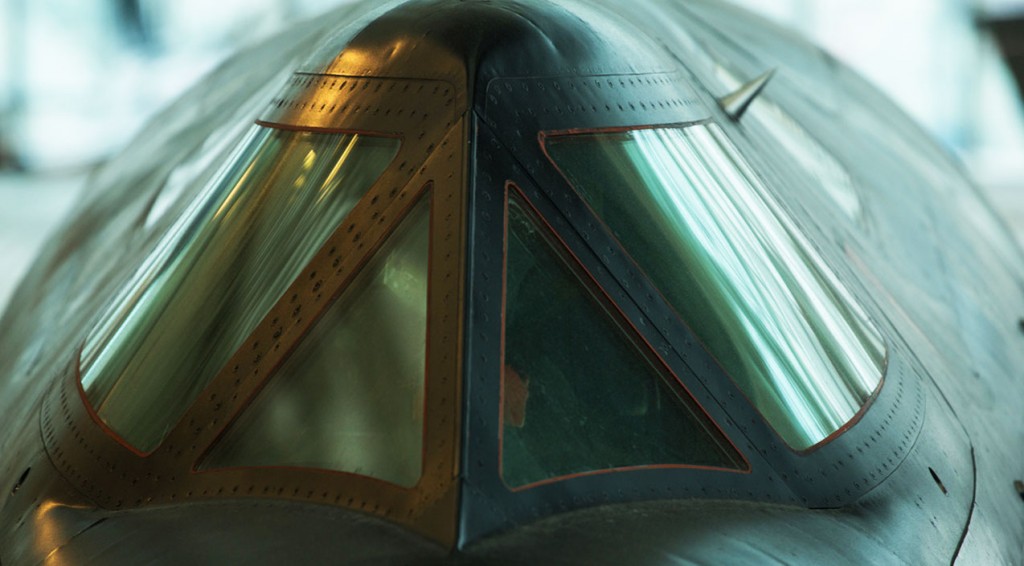 By now you probably have a clear understanding how the SR-71 Blackbird achieved its legendary status. For one, it was built in consideration to various inhospitable atmospheric factors. It had to complete successful missions without compromising the life of the pilots and crews. Because it was basically going to do things that no other aircraft can, it had to use materials not common to ordinary planes. You see, while in flight, the speed of the plane heated up the windshield to about 600 °F. It can get so hot pilots can’t touch it for more than a few seconds even with their gloves on. To avoid obstructing the pilot’s vision, the windows were made of quartz that was fused ultrasonically to the frame which is titanium hull. This was accomplished with the use of high frequency waves and consequently prevented any blur or window distortion especially from where the installed cameras peered through.

5.It Took 36 Hours To Get Ready For Flight 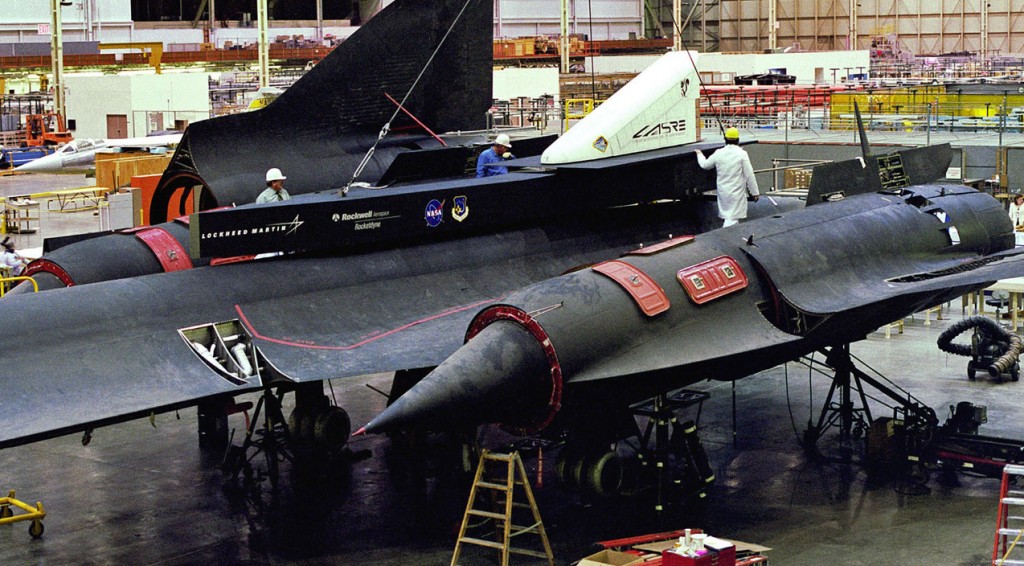 Not everyone is qualified to join the SR-71 in completing highly confidential and important missions. The crew members had to be handpicked. And for a complex aircraft, preparations weren’t that easy either. In fact, they needed a pre-flight meal which was high in protein but low in residue (steak and eggs) to lessen their in-flight bathroom breaks.  Anyway, when getting ready for a mission, it took over a day to check everything. Flight planning is often done a day before the departure. It would take anywhere from 2-3 hours to go through the flight route including discussion of game plans and possible problems they might encounter. From flight suits to cockpit instruments, it took 36 hours and countless people to make sure everything was ready before the flight. Oh, and the pilot has his own checklist by the way. Besides, when you fly a spy plane that’s way ahead of its time, you know it’s one complicated affair.

6.Although None Were Ever Shot Down, 12 Were Destroyed. 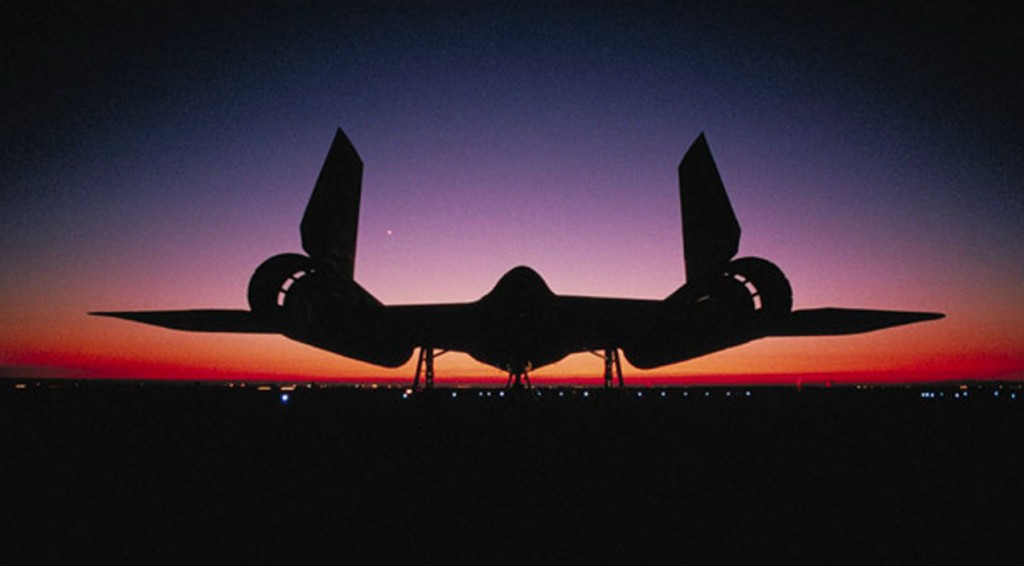 Out of the 32 Blackbirds built (in service from 1964-1998), 12 were lost due to accidents. If we were to use military jargon, we’d refer to them as “written off.” 11 of those happened between 1966 and 1972. One pilot lost his life. However, not one aircraft succumbed to enemy fire despite flying over 4,000 sorties. Here’s the thing, 85% of the SR-71 is made of titanium. Now, technically it is incredibly strong, a near indestructible metal. But it can burn. Anyway, the first Blackbird loss happened on January 10, 1967. It was during the anti-skid braking system evaluation of the prototype. Another accident occurred when the SR-71 disintegrated during a high-speed, high-altitude test flight. A third Blackbird was also lost during an in-flight explosion. The other accidents involved crash, INS platform failure, subsonic high-speed stall, post-tank collision and loss of flight controls. A cockpit section survived the accident on October 10, 1968 and is currently located in the Seattle Museum of Flight.

7.It Had To Be Refueled Right After Takeoff 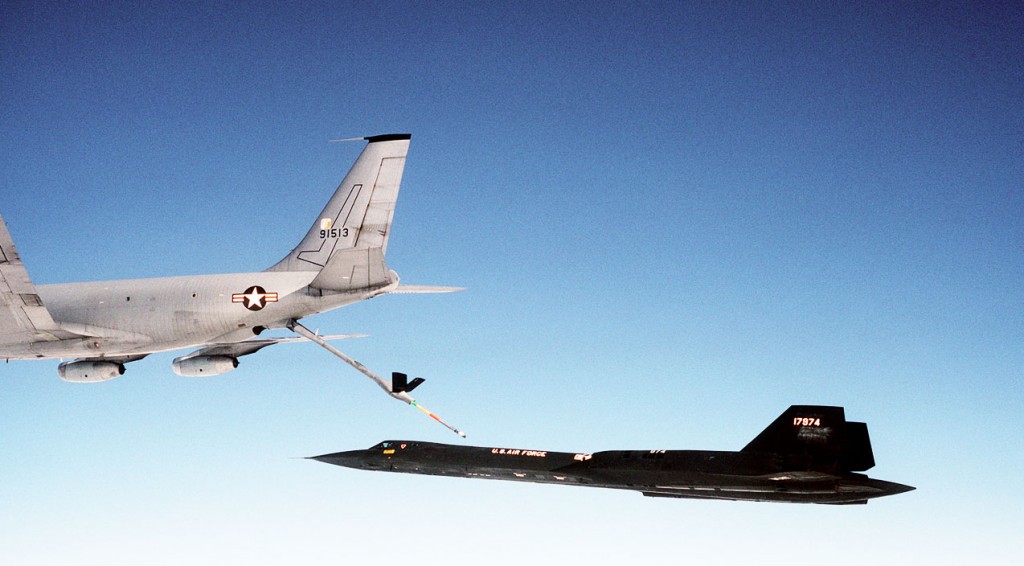 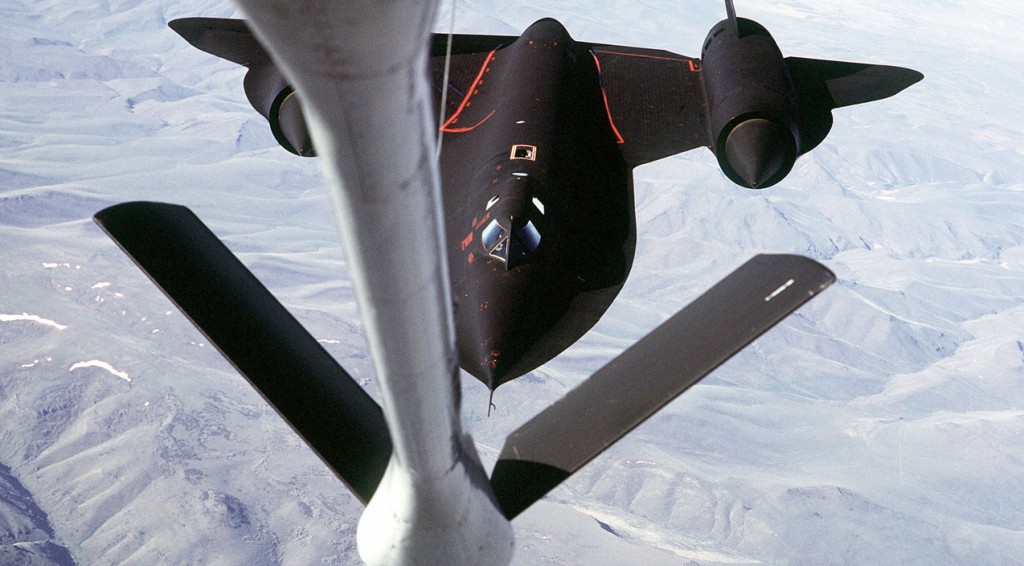 To this day, no materials exist that can keep the fuel contained inside an SR-71. Yes, even though it’s all futuristic and groundbreaking technology. Upon liftoff, the plane was cold and all its panels were loosely fitted which made it leak fuel. Once at higher speeds, the entire plane would heat up and expand, closing in all the gaps and retaining fuel. Upon landing and cooling down, the fuel that was left over would start leaking again! Also, in order to reduce the stress on the tires and brakes during takeoff, the SR-71 would only have partial (very light) fuel load. For this reason, every time Blackbirds would take to the skies, they would almost immediately have to refuel in midair with the help of the specialized KC-135Q tankers. For supersonic flights, it would take 90 minutes at most before fuel needs to be replenished. It may not be perfect but it’s pretty close.

8.Its Engines Could Power An Ocean Liner 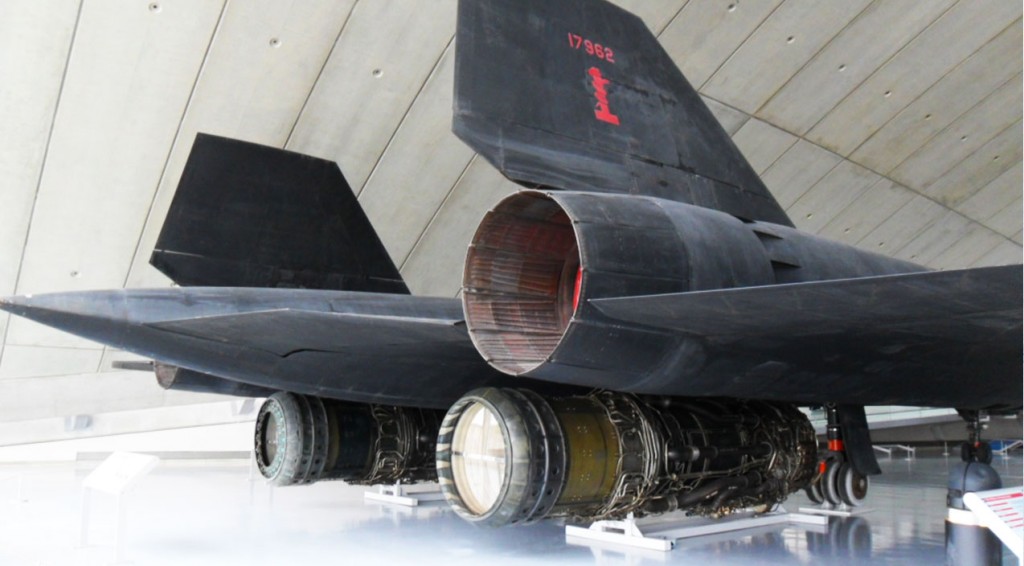 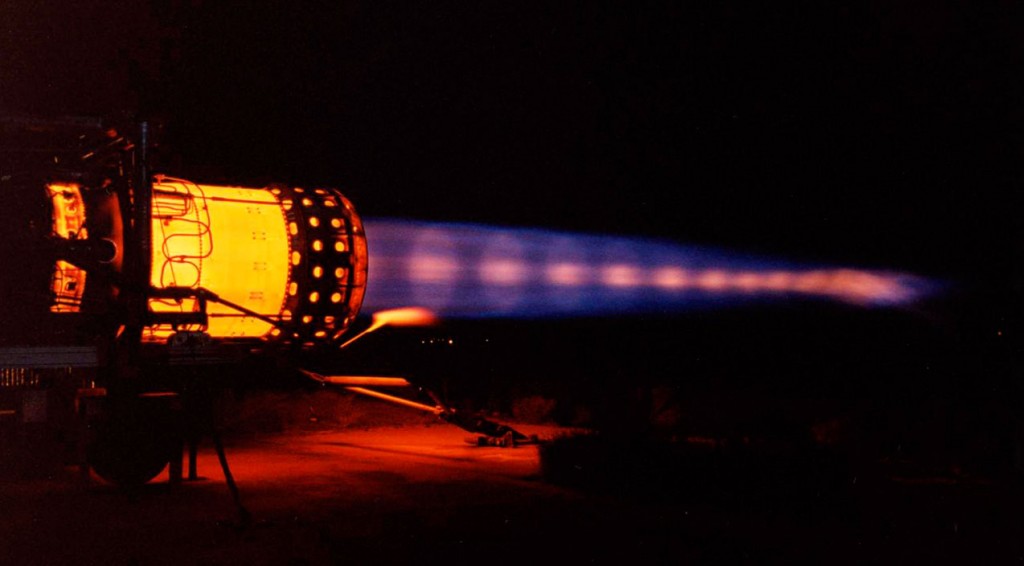 Blackbird’s Pratt & Whitney J58 jet engines (developed in the 1950s to meet the US Navy’s requirement for the Martin P6M jet flying boat) produced 34,000 lbs. of thrust owing to the unique bleed from the compressor to the afterburner. That’s about the same amount of thrust you need to move an ocean liner. To produce that amount of power, they guzzled through more than 5,000 gallons of fuel per hour! This single spool turbojet operates at subsonic speed and at more than 80,000 ft of altitude. Not one but two of these engines power the SR-71. It’s because of the J58s that the Blackbird was able to hold the record for an altitude of 85,069 ft and speed of 2,193 mph. The SR-71 may experience a very high temperature and in relation to this, the engine needs to use low-volatility JP-7 fuel which is flash-resistant and also helps prevent inadvertent ignition.

9.An SR-71 Crew Beat The Transcontinental Record Just For Fun 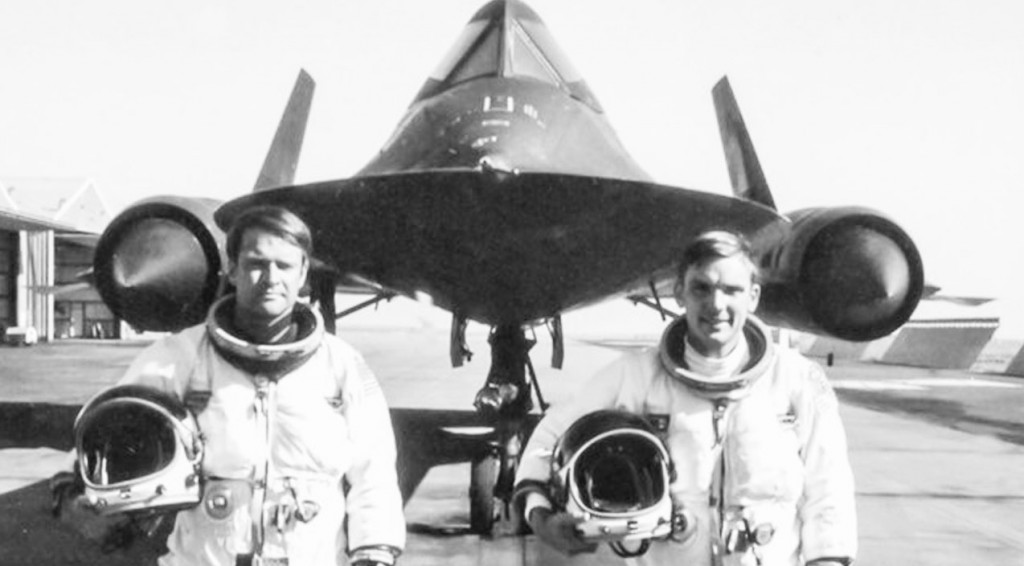 As if all the world record it holds is not enough, the SR-71 ended its service career with a bang – by flirting with the history books one last time. On March 6th, 1990, an SR-71 was to be flown from Los Angeles to Virginia’s coast to be retired at a museum. As it was its last flight, Ed Yielding and Joseph T. Vida pushed their Blackbird to an average speed of 2,124 mph (3,418 km/h) during the trip, arriving on the east coast in Dulles International Airport in 64 minutes. Of course the crowd was no less than hundreds of cheering onlookers. After clocking in another record-breaking speed as reported by the Air Force, Senator John Glenn believed the Blackbird has not been used to its full potential and that the retirement is a ‘grave mistake.’ They beat the previous record by an hour and 1 minute. This record still stands. 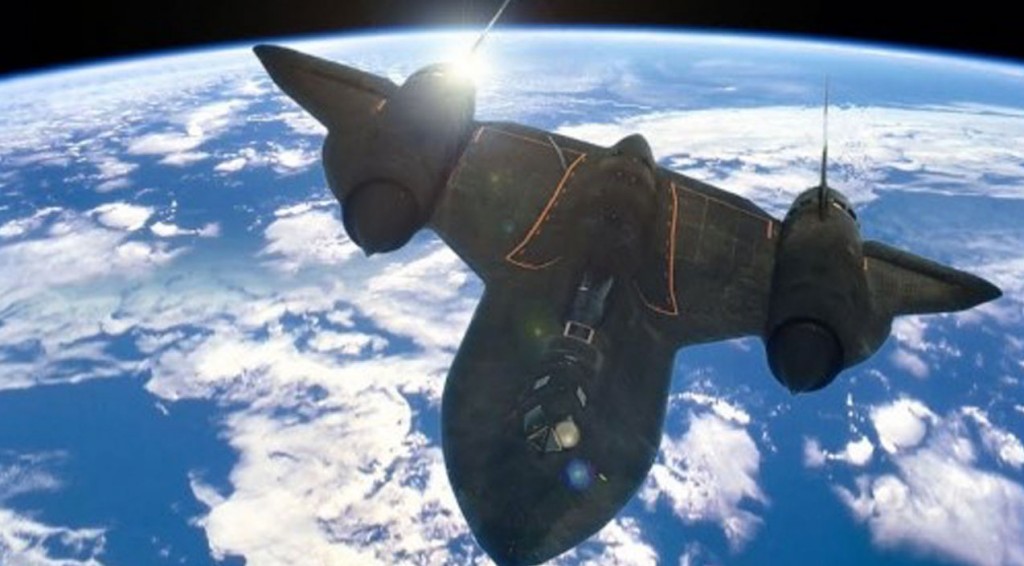 This is one of the coolest facts about the Blackbird. Over its 25 year service, enemies attempted to take it down using thousands of missiles which were fired at it to no avail. Because when you have the finest spy plane gathering intelligence over enemy territory, you’re gonna meet people who want it taken down for obvious reasons. But even though unfriendly forces have had 1,000 missile launches against it, not one was successful. That may be quite a feat but the reason behind it was simple. Once pilots detected a shot fired, they hit the throttle and simply flew faster than the missile. Blackbirds had no defensive equipment to boast of which made it extremely vulnerable. However, it was equipped with something else that no one else can rival – its speed. So basically, the aircraft was incredibly fast that it could outrun both missiles and MiG-25 fighter jets. They just couldn’t catch up.

Also, here’s a quick video that goes over some other interesting facts about this fantastic aircraft. The more you watch this stuff, the more you’ll miss this plane in action…