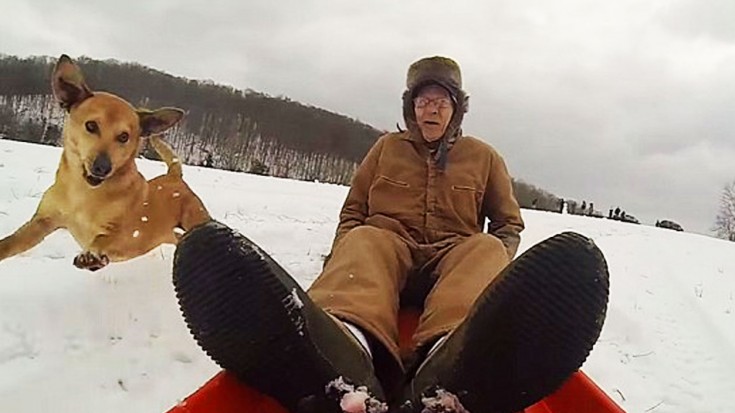 This Ride Is Nothing Compared To Surviving The War.

Meet Claude Bratcher, a resident of East Tennessee and a World War II veteran. Serving in the 122nd U.S. Naval Construction Battalion, he apparently remained as tough as he was back in the day.

After a particularly snowy day, his grandkids and great-grandkids went for a day of sledding. Having acres of land where they live, finding a great a spot wasn’t hard and for propulsion, they had a small hill and an ATV.

Claude asked if he could tag along, as he’s really active and doesn’t like being home doing nothing. Everyone was excited to have him come of course so he jumped in the truck and off they went.

With his younger family members equipped with GoPros as they were being pulled by the ATV, Claude got tired of watching. He wanted to give it a go too and they were ready to film it.

His family members were all for it. With his dog Smitty on his lap, he got slight help getting on the sled and off he went. With a big grin on his face, the sled started getting pulled faster and faster by the ATV, but do you think a World War II vet would get scared?

Well, maybe. But not Claude Bratcher.

As for his advice on staying nimble and being able to sled at 90? “Well, you can’t sit down and do nothing. You have to stay busy,” was his answer.