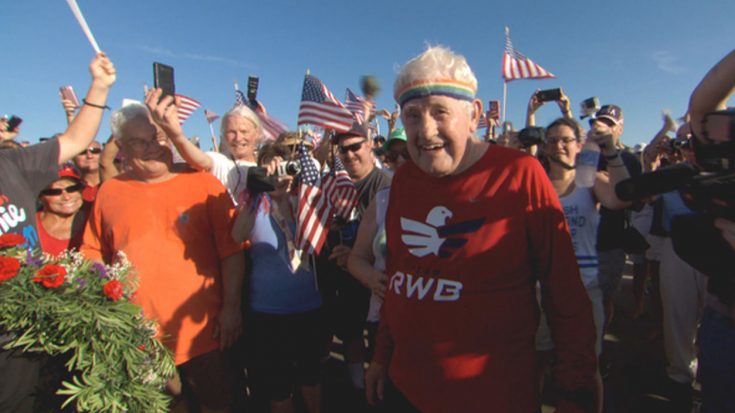 On October 7th, 2013 Ernie Andrus began his cross country run in San Diego, California heading towards the east coast. The 90-year-old veteran set out across the United States with a purpose, raising awareness for the LST 325 Ship Memorial. Andrus served on a Landing Ship Tank (LST) during the invasion of Normandy moving heavy equipment onto Axis occupied territory. The LST 325 is the last operational ship of its kind and was a crucial part of winning the war in Europe. Andrus runs across America to raise enough funds for the LST 325 travel to the beaches of Normandy once again.

“I want people to know what the war was all about and what it took to win it. Eisenhower and Churchill both made a similar remark that it’s the ship that won the war. … Without ‘em how could you … even [take] Normandy?”

Separating the country-long trek into 5-mile legs Ernie finally reaches the beaches of Saint Simons Island, Georgia after three years of running. He has become the oldest person to run across the United States, outpacing the previous record-holder who was 73. Andrus developed quite a following of supporters to join him on his mission. If Ernie can run 3,000 miles across this great country then he will have no problem sailing the LST 325 to Normandy again. See the inspirational video of Ernie Andrus reaching the finish line of his long quest.