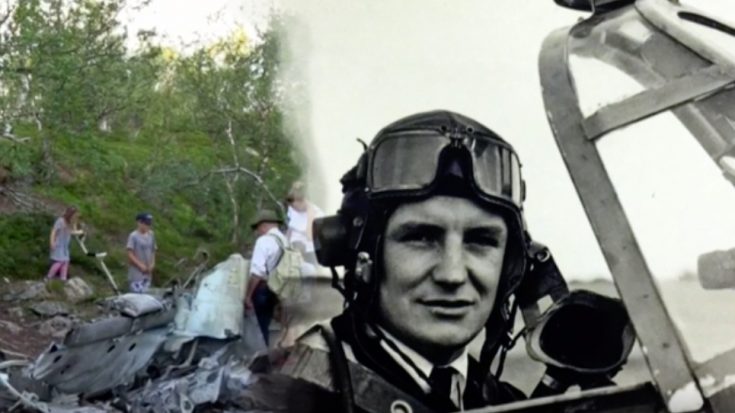 YouTube has produced a miracle. Over the weekend, Phil Richardson and his family made an emotional trip to meet his grandfather’s Grumman Hellcat. Lt. Cdr Ronald Richardson had crashed on a remote Norwegian mountain on August 24, 1944 shortly after a successful attack on the battleship Tirpitz. For 74 years, the details of his demise and whereabouts had remained a mystery. Until now.

Phil Richardson, a 44 year old Royal Navy Commander, happened to come across footage of the wreckage on YouTube. He asked the uploader for the coordinates and, locating the plane atop a remote 3000 ft. mountainside near Alta, Norway, decided to take the five hour hike accompanied by his family. This included his 75 year old father.

Finding the site was finding closure. The fuselage was riddled with bullet holes. Phil Richardson determined that his grandfather had clipped the mountainside and had been very close to surviving. As an airman himself, he marveled at his grandfather’s role as the mission leader against the Tirpitz. The brave New Zealander was 27 when he died.

With a prayer, the family left a cross on a grave they believe to be the original burial place. The belated memorial on the mountainside was painful yet healing. The journey gave the family answers and understanding even though they are not certain where his body lies now. It is possible that he rests beneath an unmarked grave covered by a New Zealand fern in a cemetery near the Tirpitz.

It also goes to show that history lives on. Even after all these years, the memories of those lost is still alive and well. Some mysteries will never be solved. Others, like this one, get a little help from YouTube.

See the video below for more on the story.