The Yak-110 Is Two Planes Plus A Jet Engine 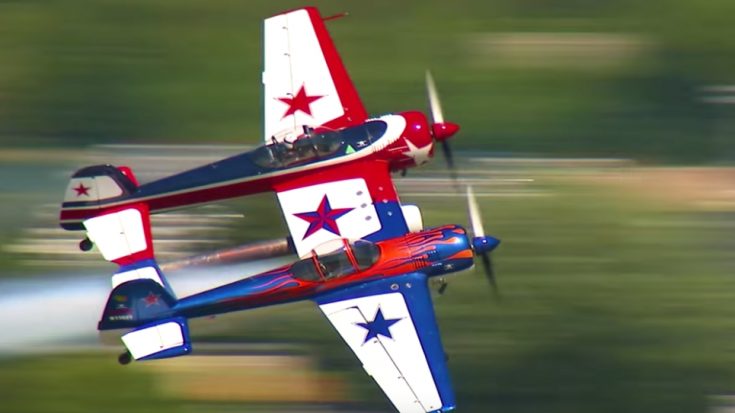 What happens when you put two Yak-55s and an an extra jet engine together? The Yak-110! This stunning plane is the brainchild of airshow pilot Jeff Boerboon who, in 2009, saw two Yak-55s next to each other in a hangar and thought to himself, “Hmm that’s kind of cool.”

With builder and restorer Dell Coller and fellow pilot Chad Bartee on board, the project began in 2016. The trio found combining the planes to be an easier task than they had initially thought, crediting the straightforward Russian engineering. The control system and the rudders all came together nicely. And it’s all relatively simple; the center wing connects to the fuselages with just three bolts each.

But what makes this plane extra special and brilliant is the addition of the its Lear 24 CJ jet engine below the center wing. Twin fuselages has been done before, but this has not. The jet engine adds 3000 lbs. of thrust for a combined 5000 lbs. of thrust. The aircraft, designed for aerobatics, can reach up to 250 mph and can accelerate pointing straight up. That’s pretty cool!

The Yak-110 saw its first flight on November 19th, 2017. It flew with the jet engine for the first time in April 2018 and debuted over the summer at EAA AirVenture Oshkosh 2018. Boerboon is excited to get more airtime in this unique creation, certain he’s only scratched the surface of its potential.

Check out the Yak-110s process and capabilities in the video below.