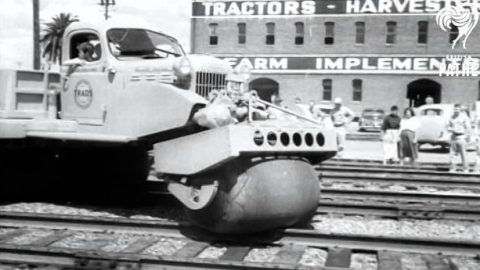 This vehicle can go over just about anything. Rolligons were developed and delivered to the US Army in less than two months after it was tested by its inventor.

Apparently, the product came to light in 1951 when William Albee witnessed Inuits using inflated seal hides to drag a heavy boat on shore.

Later in the video, inventor William Albee decided to throw caution to the wind by lying face first on the ground and getting “ran over” by the pneumatic rollers. Albee was smiling all the way through as the 5-ton truck passed over his back.

Rolligon tires were 3 feet in diameter and made with nylon and plastic. This, in turn, spreads the vehicle’s weight over a much larger surface area leading to a lower exerted pressure.

Today, Rolligons are still used by oil field workers in Alaska and Canda.