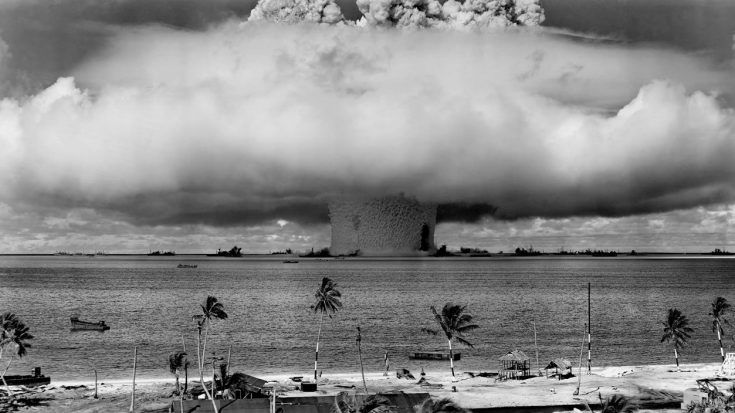 There is nothing quite like a beautiful tropical paradise. The sun shining, sand between your toes, crystal clear ocean, and a 7-mile tall atomic blast on the horizon. Welcome to the Bikini Atoll, the beautiful testing grounds for the US Military’s nuclear program.

After the conclusion of World War II, nuclear weapons had captured the attention of the entire world. Atomic bombs were successful in ending the war but they were still a work in progress. So as the nuclear weapons program developed, proper testing was necessary to see the effects of atomic blasts. The location of these tests was the Bikini Atoll near the Marshall Islands. Unlike previous weapon tests the media was invited for coverage of these bomb detonations. Camera towers were erected to view the effects of the blasts from a distance of over three miles away.

However, these detonations were not simply for display they were serving a research platform for targets. Coral reefs were cleared from the area to allow room for 95 naval vessels which would be the intended targets. These vessels ranged from Naval destroyers, submarines, aircraft carriers and even Admiral Yamamoto’s flagship the Battleship Nagato.

A B-29 Superfortress was chosen as the aircraft to deploy the bomb as well as photographing the detonation. To this day the effects of the radiation contamination have rendered the islands uninhabitable. Despite they allowed for great research for nuclear weaponry on military vessels.

“Bikini islanders and their descendants have lived in exile since they were moved for the first weapons tests in 1946. When US government scientists declared Bikini safe for resettlement some residents were allowed to return in the early 1970s. But they were removed again in 1978 after ingesting high levels of radiation from eating foods grown on the former nuclear test site.”

The film of the historic Bikini Atoll nuclear detonation can be seen in this clip provided by the American Heroes Channel.