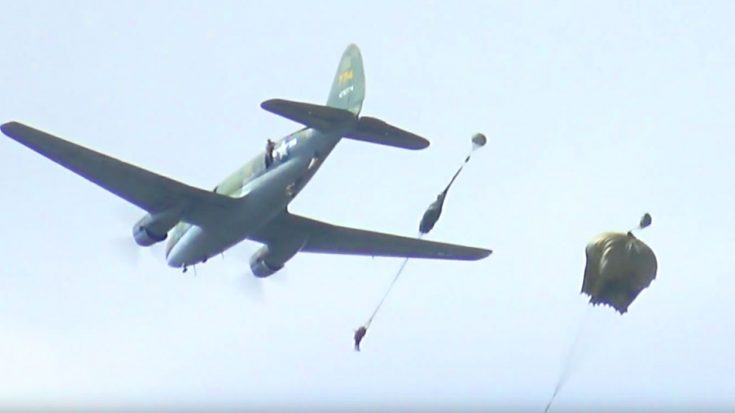 Paratroopers played a very important part of WWII with their ability to access areas restricted by land. World War II was the first time paratroopers were used in large-scale operations such as the invasion of Normandy. One of the planes that played a role in paratrooper operations was the Curtiss C-46 Commando.

Originally the C-46 was not intended for paratroopers but instead as a cargo plane. The C-46 was modified for paratrooper drops in March of 1945 in a variant known as the C-46D. Although the Commando was not as widely used for paratrooper operations as the Douglas C-47 Skytrain was used in the European Theater of War. Unfortunately, an alarming number of C-46 Commandos were lost on missions and officials forbid their use in future combat operations. After the war ended the C-46 continued use as a cargo transport aircraft but maintenance problems and random explosions earned it the title of “plumber’s nightmare.”

“At the time of its production, the C-46 was the largest twin-engine aircraft in the world, and was the largest and heaviest twin-engine aircraft to see service in World War II. After World War II, a few surplus C-46 aircraft were briefly used in their originally designated role as passenger airliners, but the glut of surplus C-47s dominated the marketplace and the C-46 were soon relegated to primarily cargo duty.”

The C-46 remained in use in smaller capacity until the mid-90s in humanitarian efforts. The Tinker Belle is a C-46 that has been around since 1944 is still airworthy and performing air shows. Check out this great high-definition footage The Tinker Belle conducting a paratrooper drop with the WWII Airborne Demonstration Team.