Careful, What This Pilot Does Might Make You Physically Sick 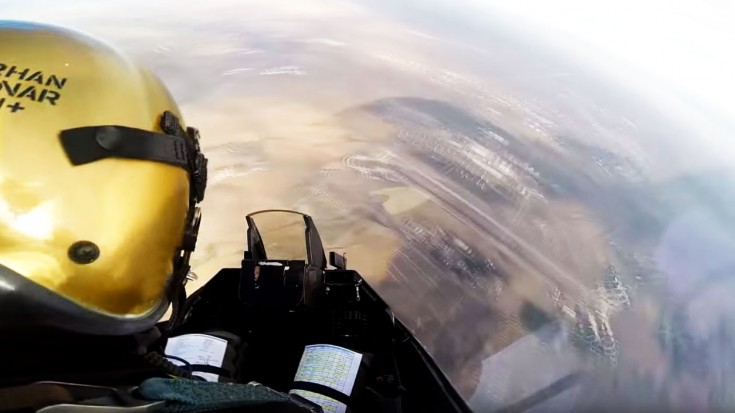 This awesome video comes to us from a Turkish aerobatic team called SoloTürk who fly the world famous F-16s. For this demonstration, they mounted a camera right in the back of the cockpit to show us a really great view out of the front of the canopy. Then, the pilot pulled some Gs and spun around like hell!

If you blow this up on the big screen like we did, the motion of that aircraft can literally make you a bit nauseous. Maybe we’re a bunch of pansies, who knows? Try doing it yourself and then we’ll talk.

Over 4,500 F-16 Fighting Falcons were produced, but they are typically referred to as Vipers due to their appearance.

As for this pilot, his name is Erhan Günar. A 2nd demo pilot and 1st Lieutenant, he’s a 32 year old who graduated from the Air Force Academy in 2005. Proving himself an extremely capable and ambitious pilot, he got himself a spot on this team. The rest, is Youtube history (at least for us!)

The SoloTürk demonstration team was established in 2009 by the Turkish Air Force. Their goal was to make known the capabilities of the F-16, something we in the U.S. know much about. Fast, maneuverable and deadly, F-16s have been around since 1974 with no end of service in sight. As of today, it’s actually the second most commonly used military aircraft in the world.