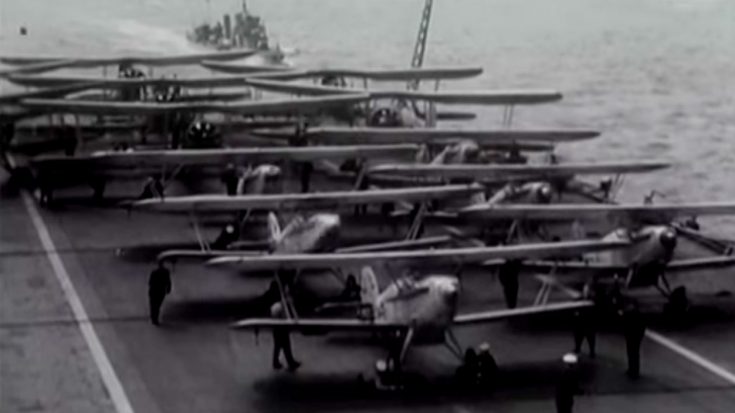 The Battle of Taranto was hardly a fight but in actuality, it more of a massacre. Against all odds, a group of outdated Royal Air Force Biplanes managed to deal one of the most severe blows to the Italians during WWII. Careful planning played a significant role in the effectiveness of this brutal attack that crippled the Italian fleet.

On November 11th, 1940 in the dead of night the Royal Air Force launched their attack from their base in Malta. The cover of the night gave the RAF the element of surprise, but at the same time, it severely reduced the visibility of the targets they were set to attack. The RAF used Fairey Swordfish Torpedo Bombers for the attack since they could function at night.

To compensate for their lack of sight they implemented a method where they dropped flares near Navy vessels to illuminate them for ease of attack. A combination of poor defenses and surprise allowed the RAF’s attack to be so effective. After the attack was over at least half of the Italian fleet was destroyed, which put the British Navy in a numerically superior position for ships in the Mediterranean.

However, there were some unintended consequences of the raid on Taranto. This was the first time than an all aircraft ship-to-ship combat mission was and it was proven brutally effective. Many historians believe that these tactics were the same ones that inspired the Japanese to launch their attacks on American ships docked in Pearl Harbor.

“The evidence usually features the travel of Lieutenant Commander Takeshi Naito, assistant naval attaché in Berlin, to Taranto in December 1940 to view damage and discuss the attack with Italian naval officers.”

Humiliated by the attack, Benito Mussolini completely denied that the attack occurred. But the Royal Air Force provided proof of the raid to boost morale that you can see in this historic film reel.