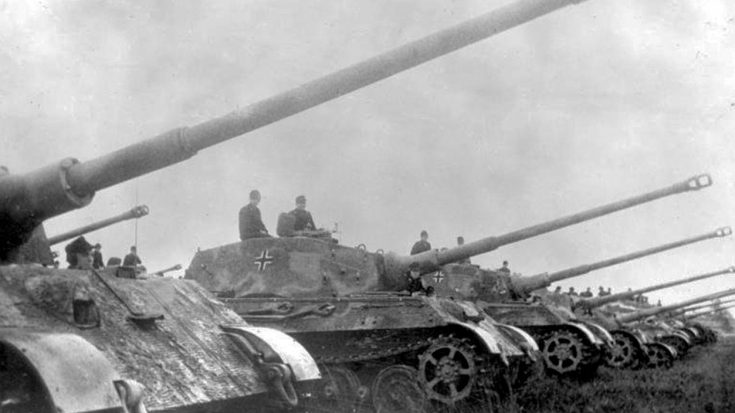 Tanks may have been the most instrumental part of WWII in the European Theater of War. They allowed the Germans to enact the Blitzkrieg to sweep across Europe relatively unchallenged by opposing nations. The first generation of Tiger Tanks gained swift victories in the early years of the war, but the Germans wanted a bigger and better weapon which led to the King Tiger Tank.

“The German King Tiger tank was the heaviest tank in active service during World War II and a forerunner of modern Main Battle Tanks. Weighing in at nearly 71 tons, it saw action on the Eastern Front in May 1944 and on the Western Front in August 1944.”

The centerpiece of the King Tiger tank is its massive 88mm gun. Originally this gun was used for anti-aircraft purposes but after realizing it could be more effective on a mobile unit it found its way to the top of the King Tiger. On the ground, it was best suited for combat with other tanks, its gun able to destroy heavy Allied units in a single shot.

“The gun’s accuracy allowed it to pierce 150mm of metal armor even if the tank’s position was more than 2 kilometers away from the intended target. The shell’s ability to travel at about 2,200m in an estimated 2.2 seconds (and sometimes even faster) meant this tank had the capability to destroy enemy tanks from a distance, keeping the Tiger out of enemy range.”

The King Tiger was surprisingly agile despite its size and inspired fear in the Allied forces knowing that they would struggle against its heavy armor and powerful weaponry. Weaponology has recruited several weapon historians to discuss the most infamous tank of WWII in this clip.