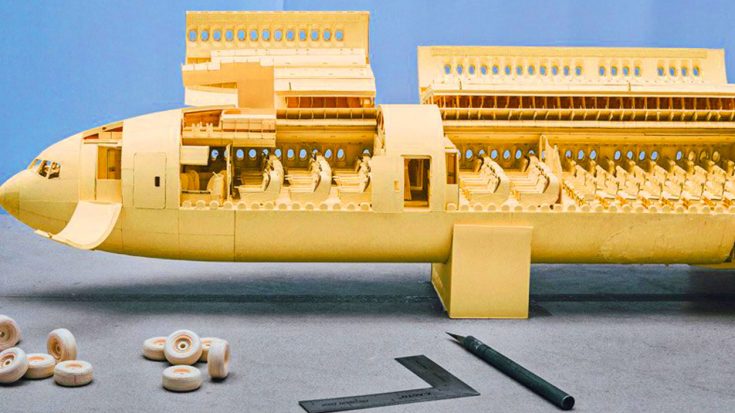 Everyone has their hobbies and passions and it is not unusual to see them combined. Luca Iaconi-Stewart is an artist with a passion for architecture as well as aviation and he has found a way to combine the two of them. Luca has spent the better part of a decade crafting an incredibly detailed 1:60 scale model of a Boeing 777 made complete of paper from Manila folders.

Luca Iaconi-Stewart was inspired by a high school architecture class to create a model plane. The first design was a crude mockup but eventually, Luca improved his technique and began to study the engineering of planes for a better model. Over the better part of a decade, he has been crafting this Boeing 777 from manila folders.

“I really enjoy the sense of calm and mediation that it brings when I really get into the building process. It’s really exhilarating when you get to the end and you see a component coming to life.”

This Boeing 777 isn’t just a decorative piece, it is functional too, just about everything works. It has cargo holds, the seats recline, even the landing gear is retractable.

There isn’t anything about this paper plane that isn’t amazing to look at. Luca gives you a better view of the fully-functional Boeing 777 in this clip.