Astra Missile Launches At 4 Times The Speed Of Sound 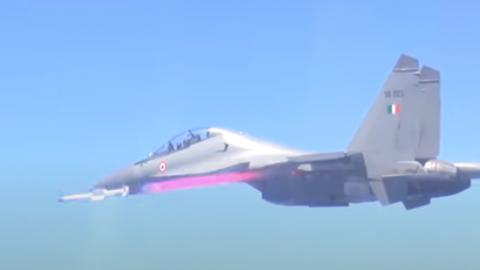 For the past several years, India has been hard at work developing an indigenous missile for use in their air force. The Indian Air Force currently purchases weapons from other nations which has proven to be costly and unable to suit their specific needs. The newly developed Astra Missile will allow India to reduce spending as well as providing their fighters with a versatile new weapon.

The air-to-air missile capable of striking its targets from over 60 miles away, beyond the horizon in moments. The advanced missiles will soon be used as the weapon of choice for the Indian Air Force’s Tejas combat aircraft as a means of destroying hostile supersonic fighters.

“Astra is a single-stage solid propellant missile that is 3.57 m long and flies at a speed of over four times the speed of sound at Mach 4.5. It has already been successfully tested with pre-fed, fixed target coordinates.”

The Astra Missile is expected to reach completion in December 2016 and move on to production. Operation Iron Fist gave the first public demonstration of a Sukhoi Su-30MKI launching an Astra Missile in this clip.