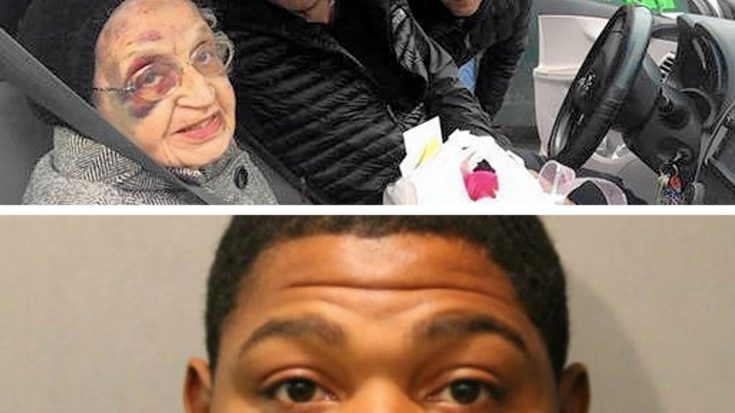 On December 8th, 2016, Josephine Regnier, a 94 year old Navy veteran of World War II, was waiting for her daughter to pick her up from her Chicago apartment. All of the sudden as her daughter, Judy Dusk, later put it, “this man just came in the gangway and assaulted her, beat the **** out of her, took her purse and ran.”

Regnier suffered three fractured ribs, a black eye, a huge bump on her head and the doctors were fearing a concussion. All for the $50 dollars she said was in her purse.

It took 6 days to find the assailant and it came with some help from two good samaritans. Jimmy and Tommy Pieprzyca who own a pizza shop in which the victim’s son works, offered a $5,000 reward for information leading to an arrest. They said that their employees are like family and they care for the neighborhood and want to keep it safe.

The pizza shop owners were contacted by an individual claiming that the suspect called him to ask for help leaving the state. They relayed the information to the authorities and an arrest was promptly made.

Olajuwon Claiborne, 26, was arrested at his residence. He immediately confessed to the crime as well two other unsolved robberies in which a 32-year-old woman and a 65-year-old woman were involved.

A background check also revealed that Claiborne has four earlier felony convictions, some committed while he was on probation. He served six and two years in prison respectively.

As for the judge, he did what any sound minded individual would do. Although a verdict has not been reached as the case still needs to go to trial, the judge showed him things to come.

Claiborne is to remain in jail without bail and offered him a few choice words that were personal.

“If ever there were a case — with the exception of first-degree murder — that demanded no bond, it is this case…The citizens of Chicago are not safe if Mr. Claiborne is allowed to walk the streets of Chicago.”-Judge James Brown

Claiborne was charged with “six counts related to the three robberies, including home invasion causing great bodily harm and aggravated battery of a victim over 60 years old.”

The price he pays will be heavy and rightfully so.

(The video below shows Claiborne crash a car he stole from the 65-year-old woman in July, trying to escape after this crime.)