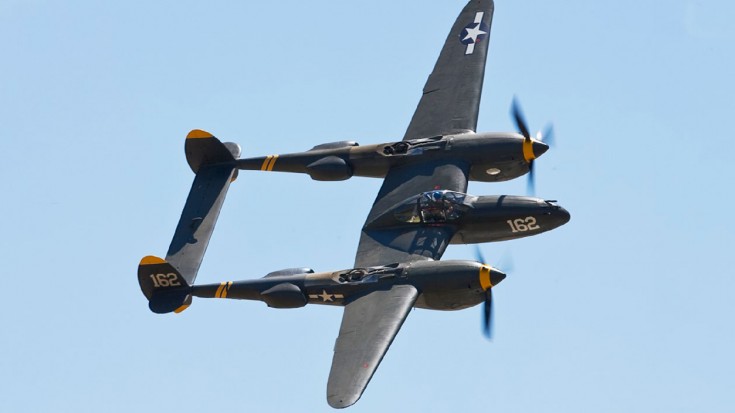 The P-38 Lightning was the first American plane to develop a kill ratio against enemy German aircraft in the summer of 1942, by dispatching a Focke-Wulf high above Iceland. Designed and produced in California by the Lockheed company, P-38s saw the light of day in 1937, a plane meant to intercept and fight enemy aircraft at high altitudes.

The twin-tailed fighter was fitted with two V-12 piston engines but could only accommodate one pilot. Despite exceeding the size and weight of other WW2 fighters, Lockheed’s creation could climb over 3,000 feet in under a minute and reach a speed of over 400 mph. With a wingspan of 52 ft, the P-38 could carry as much ammo as the first B-17s, which was much needed for its 4 Browning machine guns, M10 rocket launchers and the one 20mm Hispano cannon.

Dubbed as the fork-tailed devil by German soldiers, the P-38 Lightning proved its versatility and resilience by flying over Europe and the Pacific. It’s responsible for gathering roughly 90 percent of the footage filmed above the old continent, destroying an impressive number of Japanese fighter planes and carrying out more than 130 thousand missions.