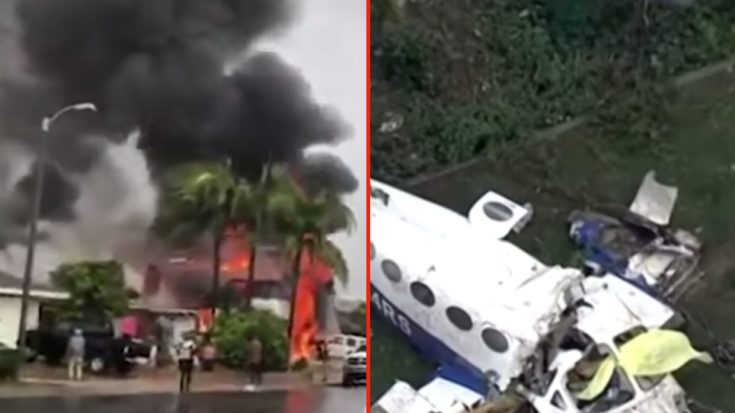 Sunday, February 3rd was supposed to be an exciting day of snacking, socializing, and watching the Super Bowl with friends and family. But for a neighborhood in Yorba Linda, California, Super Bowl Sunday turned tragic when a small plane crashed into a home.

The small Cessna 414A broke apart above the Southern California suburb just 10 miles from Fullerton Municipal Airport. It made it just 700 feet into the air before declining suddenly, falling from the sky right on top of a home.

Two structures were immediately engulfed in flames, one of them taking the most damage. Neighborhood residents, shocked, fled their homes to find debris strewn across their yards and cars.

The fuselage appeared to be mostly intact in one resident’s back yard.

Aftermath Of The Crash

Unfortunately, the home most affected had been holding a Super Bowl party with at least ten people attending. Witnesses said they saw people screaming as they escaped the burning building.

Sadly, it was reported that two men and two women were killed inside of the home. The pilot was also killed in the crash, making it a total of 5 killed.

The explosions, which occurred at 1:46 pm, could take up to one year to fully investigate.

Our prayers are with those affected.

You can find the news report in the video below.