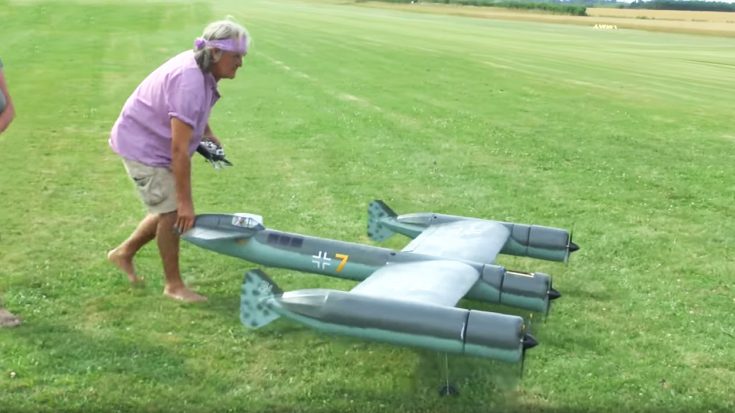 World War II most definitely progressed aviation over the span of those six years, each country trying to build a better plane to outmaneuver and outrun its opponents. As air superiority was of the utmost importance in the race to win the war, there were a lot of new prototypes of planes built to test something or other. Many of these designs never saw the light of day.

Lucky for us, there are folks out there who refuse to let these designs fade into history books. Although not full scale, some modelers and Rc pilots opt for building never before seen planes as opposed to going for the glorious warbirds everyone knows of.

Here, a man by the name of Ken brought with him his latest work of art. A Blohm & Voss BV P.170. Now, here’s what we know about the real thing.

This designs seems inherently difficult to fly, and by the looks of it, really is.

It was designed by Richard Vogt in 1942 as a fast bomber. The concept was to make it faster than any intercepting fighter plane of the time which is why it got three BMW 810D engines. These were used on Fw 190s, Do 217s and Ju 88s to name a few famous planes.

All in all, it was too little too late. Turbojets were being tested at the same time as this design surfaced so the Reich focused on those as opposed to building something they knew would be obsolete once it hits production.

We can, however, watch this fantastic Rc fly. Enjoy.