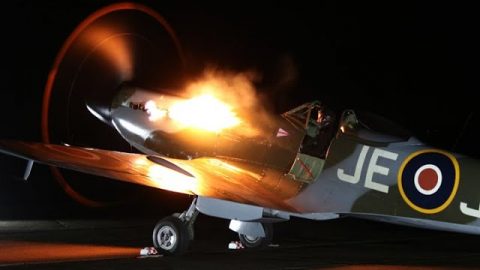 This Spitfire XIV definitely lives up to its name as it’s literally spitting fire. Later-developed Spitfires like this had the “newer” Rolls-Royce Griffon engines that could produce 2,340 hp later in the war.

It was a huge improvement to the Merlin engine and gave the Spitfire improved performance and capabilities. Though it did lose some of the handling characteristics that pilots loved, the Griffon-powered Spitfires still outmaneuvered the German planes.

As good as the flames coming from the exhaust pipe look, it can be quite bad for the engine. As one commenter put it, poor fuel distribution or unburned fuel entering the exhaust might be the reason why.

Nevertheless, it adds to the appeal of the Spitfire and makes for a great viewing experience.