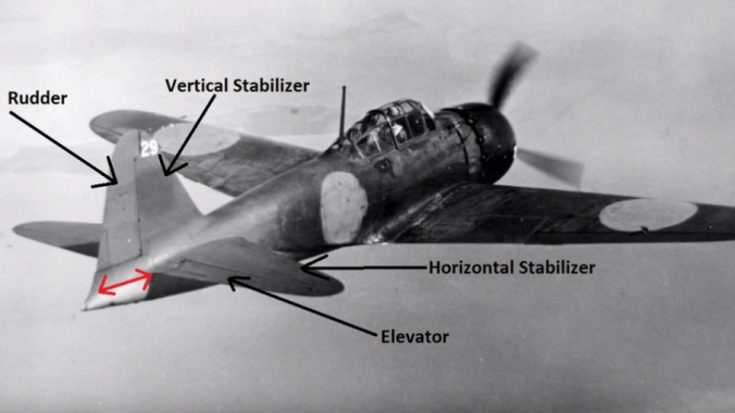 Have you ever noticed that the horizontal stabilizer and elevator are positioned unusually far forward on the A6M Zero?

Well, here’s the why and how:

The A6M Zero was built with a specific goal in mind; Japan wanted to field extremely maneuverable aircraft. The design team was able to refine the Zero by running it through simulations in a special wind tunnel. Focusing on extremely high angles of attack, they noticed that the rudder was disrupting the airflow. So they moved the stabilizer and the elevator forward, allowing the rudder to be more effective. It made all of the difference. The Zero performed excellently, making the Zero the most maneuverable plane of its time.

The Downfall Of The Zero – Allied Technological Advancements

But the glory would not last. This kind of design philosophy prioritizing a maneuverable plane was already obsolete by the time WWII started, and opponents quickly learned to use hit and run tactics to defeat the Zero in battle. All of the elegant spins and rolls in the world couldn’t make up for the newer, faster, and better equipped Allied aircraft.

Most People Wouldn’t Notice This

There are, of course, other factors that helped the Zero’s maneuverability. Rudder design was another major contribution. But this two and a half minute video touches nicely on a single subject that most people probably wouldn’t even notice. Details like this always turn out to be some of the most interesting!