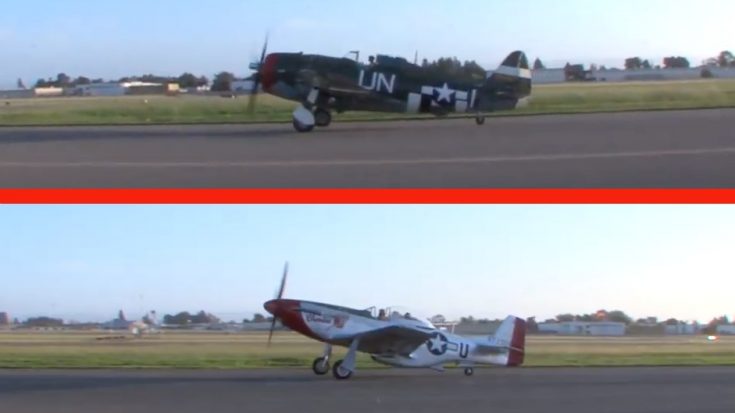 Though perhaps not as aesthetically pleasing as the Mustang, the P-47 Thunderbolt pulled its weight in WWII. (And at 50% heavier than the Mustang, it weighed quite a lot.)

The Thunderbolt sported a roomy, lounge-like cockpit and was fantastically durable. The addition of a bubble canopy added great visibility. Only about .7% were actually lost in action, gaining the Thunderbolt loyalty among pilots like Lieutenant Francis F. Gabreski, an ace pilot with 28 victories. Still, despite the capabilities of the Thunderbolt, it was met with resentment by pilots who preferred lighter and more maneuverable planes such as the Spitfire.

It also sort of looked like a milk bottle, earning it the nickname, “flying milk bottle.” Some also called it “juggernaut,” which shortened to “jug.”

The Thunderbolt vs. the Mustang

Watch the clip below to see both the Thunderbolt and the Mustang take off. The first to take flight is the heavier Thunderbolt, powered by a Pratt and Whitney. The Mustang follows just moments later. This video displays a great visual and audible comparison between these two WWII legends.