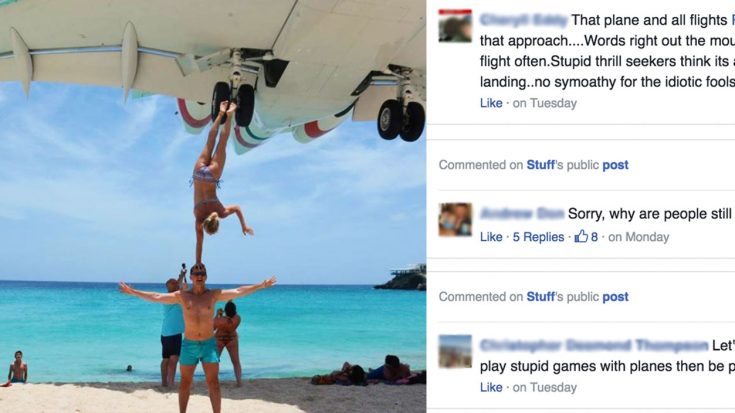 The above picture is spreading like wildfire around the internet right now, many armchair pilots and generals haling to throw the two in jail for endangering all the people on that aircraft and possibly having the beach closed down because of them.

First off, the vacation island of St. Maarten sees these types of landing countless times a day. Located in the Caribbean, the island is so small and mountainous that the airstrip could only be built right off the beach. The end of it is fenced off (many people standing too close to it for the thrill of getting jet blasted) then you have a little bit of pavement and then silky soft sand and those beautiful, turquoise waters. It’s natural, of course, for people to stand under the glide path and take killer photos.

The couple decided to have the female do a one-handed handstand on the dude’s head, which is impressive by the way, to get a cool pic. When they posted it, however, the backlash was relentless from both media companies and social media users. Here are some examples below:

As aviation fans, we know that the aircraft was in no harm and neither were the tourists. Regulations dictate that the aircraft has to be 150 feet over the beach when landing so this whole picture is just a trick of the camera. Also, EVEN if she got clipped, it would be the first time in history an aircraft went down because someone kicked its tire.

P.S.-You can find a neat compilation of landings on this island below.