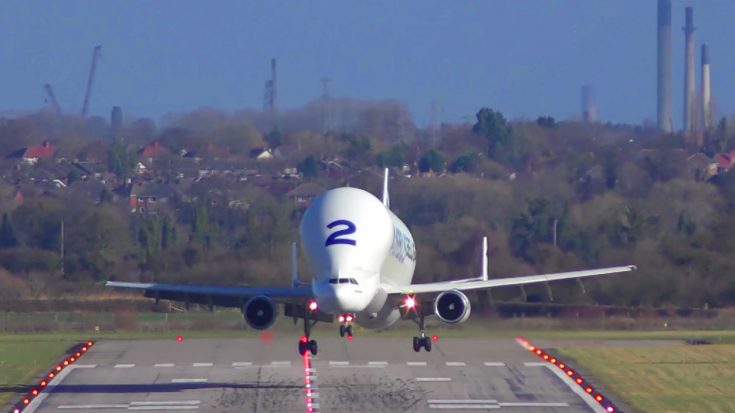 Crosswind landings are no joke because they put an aircraft in a tremendous amount of danger. Only the most skilled pilots should attempt them because what goes up could come down very hard. The bigger they are the harder they crash so an aircraft like the Airbus Beluga needs extra attention when it comes down to a crosswind landing.

The Airbus Beluga is an odd-shaped jet with an oversized cargo hold built for carrying some of the biggest equipment around. Based on the Super Guppy plane which was used to carry NASA space shuttles it proved to be inefficient for the necessary high-volume transportation. The Beluga incorporates similar elements of the Guppy but improves upon the concept by using jet engines and additional cargo space.

The Beluga has been contracted around the world to carry spacecraft, large artwork and even full-size helicopters. Only five Airbus Belugas were built so the sight of one of them is actually quite rare. The sight of an Airbus Beluga in the middle of a very risky crosswind landing is an even rarer sight to see.

Check out the Airbus Beluga touching down on at an airport as it scrapes through a dangerous crosswind.