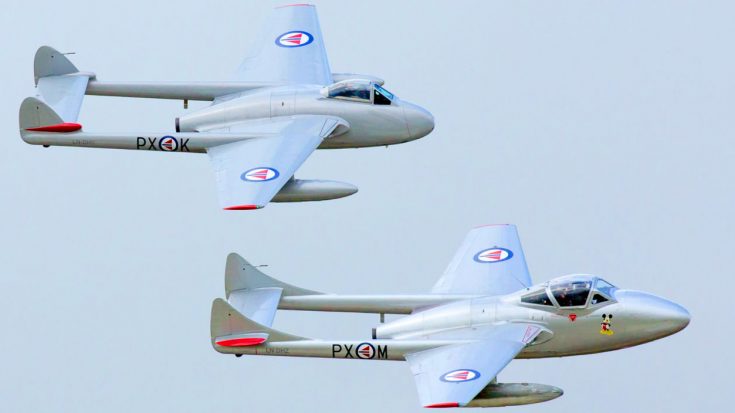 Developed during World War II the De Havilland Vampire was the Royal Air Force’s second jet-powered aircraft. Making its debut in 1946, the Vampire narrowly missed the chance to serve in WWII.

Jet propulsion was relatively new when the Vampire was created and not expected to go beyond a role as an experimental aircraft. However, testing yielded positive results and the Vampire went on to be mass-produced with numbers reaching over 3,000. With speeds reaching 548 mph the Vampire found a role as an interceptor, replacing WWII-era planes such as the P-51 Mustang.

“The Vampire was an impressive record setter, responsible not only for the first jet aircraft takeoff and landing from a carrier but also other firsts. The Vampire was even used to test rubber decks on aircraft carriers, an innovation that would allow jet aircraft to eliminate landing gear and use the space for extra fuel tanks.”

It Served the RAF for 20 years before finally being retired in 1966 in favor of more advanced jet fighters. It is estimated that only about 80 De Havilland Vampires still exist and less than 10 are flyable. In an amazing twist of fate, the Dunsfold Airshow managed to unite two of the flying Vampires for an aerobatic act in this video.