Cameraman Sets Himself Up For The Ultimate B-29 Overhead Pass 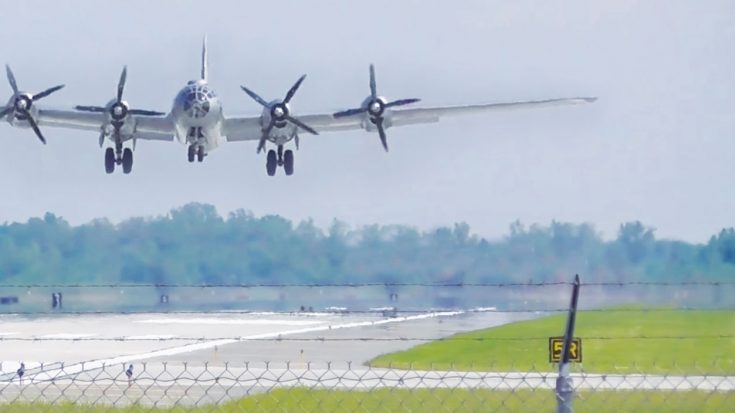 Now Imagine Squadrons Of Them Overhead On A Bombing Run!

As of this writing, Fifi is the only airworthy B-29 Superfortress in the world. Another one, named Doc, is undergoing restoration and is nearly complete, however, more money is needed to get that finished. Until then, Fifi is all we got. Out of the nearly 4,000 planes built, we’re down to only one that’s airworthy. That’s why it is so awesome to see any footage of this rare wonder, and the guys at AirshowStuffVideos.com have captured a really awesome takeoff from Willow Run Airport during the 2015 Thunder Over Michigan airshow.

The B-29 Superfortress was the largest aircraft to be in service during World War II.

As you’ll be able to hear, this amazing plane roars over the cameraman during takeoff. Although known as being slightly unreliable, the engines that now power Fifi are actually a custom built combination of the Wright R-3350-95W and R-3350-26WD engines. Replacing the original R-3350-57AM engines made Fifi airworthy again in 2010. The whole restoration project took about 4 years and over $3 million dollars.

Fifi is now housed at the Cavanaugh Flight Museum in Texas and is often flown during airshows as well as being loaned out a to take part in films.